Banks with non-performing loan ratios of 3 per cent or more will have to sell the loans to the Viet Nam Asset Management Company, a new group due to officially begin operations on July 9 this year.

Banks with non-performing loan (NPL) ratios of 3 per cent or more will have to sell the loans to the Viet Nam Asset Management Company (VAMC), a new group due to officially begin operations on July 9 this year, according to a newly-issued decree. 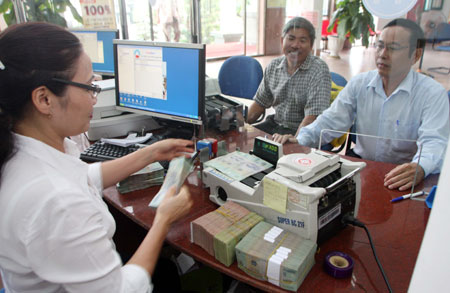 According to the decree on VAMC signed on Monday by the Prime Minister, banks that failed to comply with the regulation will be inspected by the central bank or they will have to hire an auditing company or independent evaluation firm to assess the quality and value of their assets, equity and charter capital at their own expense.

Based on the audit's results, banks will have to sell their NPLs to the VAMC to ensure NPL ratios stay at a safe level, while also restructuring under plans approved by the central bank.

According to the decree, VAMC could purchase bad debts of banks in two ways: it can buy bad loans at their book value by issuing special bonds, or at market value by using other sources.

The bonds will have a maturity of five years and banks can use them as collateral to obtain refinancing funds from the central bank. However, banks must set aside 20 per cent of the bonds' value as provisions every year until the bonds mature.

In addition to having to be backed with collateral, the bad loans and collateral must be legitimate and have full records and legal papers.

To have NPLs bought by the VAMC, borrowers must also still alive, and the balances of bad loans or outstanding bad debts of borrowers can not be lower than the level prescribed by the SBV.

The Prime Minister will decide that the VAMC buys bad loans that do not meet those above conditions as suggested by the central bank.

According to the central bank, NPLs held by the country's banks reduced to 6 per cent of total loans last month against 8-10 per cent last October.

Tri Thuc Tre online news reported that banks' business reports last year showed that most of 10 largest banks had NPL ratios of below 3 per cent. Only Agribank posted very high bad debts of 5.8 per cent of its total loans or VND27.8 trillion (US$1.32 million). Agribank's bad debts equaled to the combined NPL figure for Vietcombank, BIDV, Vietinbank, and , according to the online news service.

Some other small banks managed to control NPL ratios at safe levels such as KienLongBank with 2.77 per cent; DongABank with 2.61 per cent and VietCapitalBank with 1.9 per cent.

Among small banks, reported a bad debt ratio of up to 7.2 per cent. However, this is an exception as it has recently restructured, after merging with TinNghiaBank and FicomBank.

NPL ratios of banks forced to restructure were quite high, with 6.89 per cent for Western Bank and 5.6 per cent for Navibank.

Among those not subject to mandatory restructuring, BaoVietBank had the highest NPL ratio of 5.94 per cent although its total NPLs were at only VND400 billion. The ratio was up to 4.4 per cent at DaiABank.