This price was not much higher than some imported luxury cars using gasoline. However, after consideration, this distributor decided to not import this type of car because technology was limited and the infrastructure for electric cars in Vietnam was underdeveloped.

In 2017, Mai Linh Group planned to develop electric taxis in big cities. However, this plan failed because of a simple reason: there were no charging stations for electric taxis. Moreover, what would happen if the electric taxi had to stop for at least 30 minutes for charging? In general, electric cars seem to be as inconvenient as cars using gasoline

The current electric vehicle market has witnessed significant progress compared to 2-3 years ago. VinFast has received orders for its first electric car model, which is expected to be handed over in November 2021. Some other firms have imported electric cars for distribution. The prices of these cars are similar to gasoline-fueled cars in the same segment.

In some cities, there are also a few charging stations for electric vehicles, where electric cars can be quickly charged within 25 minutes to have power enough for traveling 200 km. In the near future, many fast-charging stations will be built across the country, with a charging time of 15 minutes, for traveling nearly 200 km. However, that is not enough for the development of electric vehicles.

When will gasoline-fueled cars replaced by electric vehicles?

In the world, consumers only buy electric cars with batteries useful for a distance of 400km, with fast charging times and cheap prices.

According to automotive expert Nguyen Minh Dong, one of the most important components of an electric car is the battery.

Currently, all electric vehicles use lithium battery technology, also known as liquid batteries. The power capacity of this battery has reached its limit with 150 Wh/kg. To increase the capacity, the volume of the battery will be large, resulted in high costs and poor performance.

For example, the Tesla Model S can travel 413km on a single charge, but the 85kWh battery costs up to $17,000, accounting for nearly half of the car's value.

Moreover, the risks of causing fire or explosion of liquid batteries is very high. Slow charging takes time, while fast charging is more likely to lead to the risk of fire. This poses an urgent need to develop a new battery generation.

Many people believe that the future of electric vehicles is solid-state batteries. Solid-state battery technology uses solid electrolytes, replacing liquid electrolytes. It is possible to make batteries that are smaller in size with a greater capacity. Solid state batteries are also safer for users because they do not contain toxic, flammable liquids and have a longer lifespan. In particular, this type of battery also has a faster charging speed.

However, solid-state battery technology is still under research and development and production costs are high.

It is said that electric cars using solid state batteries will appear on the market from 2025. 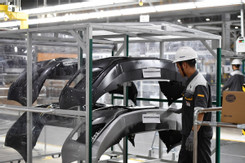