The Khanh Hoa Province People's Court has said that it received the complaint of the Rong Viet Company against the Performing Arts Agency for revoking its license of the Queen of the Sea beauty contest 2013.

VietNamNet Bridge - The Khanh Hoa Province People's Court has said that it received the complaint of the Rong Viet Company against the Performing Arts Agency for revoking its license of the Queen of the Sea beauty contest 2013. 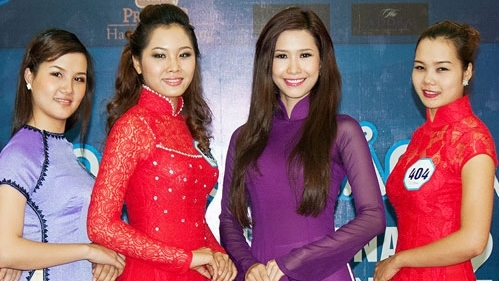 Contestants of the Queen of the Sea pageant.

According to the petition, on March 29, 2013, Rong Viet applied for the Performing Arts Agency’s license for organizing the 2013 Queen of the Sea beauty pageant. On April 4, the Agency issued a decision permitting Rong Viet to hold the event in Nha Trang City, Khanh Hoa province.

Once being licensed, the company held the preliminary round in Hanoi, Ho Chi Minh City and Nha Trang and completed the preparatory work for the semi-finals on June 2 and the final round from June 3-9 in Nha Trang.

However, on June 1, the Performing Arts Agency decided to withdraw the license of the beauty pageant because the organizers made a lot of mistakes and broke the government regulations on the organization of beauty contests, fashion shows and art performing activities.

According to the Performing Arts Agency, of the 40 finalists, four contestants did not have personal files, eight others had insufficient records and one had only the application letter.

The organizers could not provide documents related to the qualifier and semi-final rounds of the pageant, the basis for choosing the finalists.

The qualifier round in Hanoi (18/5), Ho Chi Minh City (24/5) and Nha Trang (26/5) took place without the establishment of a judge panel and the issuance of the pageant regulations.

After the preliminary round, the organizers issued a decision to set up a jury on May 28. According to the inspection team, the organizers did not hold the semi-finals in accordance with the original plan that was approved.

The Vietnam Sea Queen beauty pageant is designed as part of the Sea Festival 2013 in the central coastal city of Nha Trang this June. The competition aims to seek a face to promote tourism of Nha Trang in particular and Vietnam sea tourism in general. The top three contestants of the pageant will become the representatives of Vietnam’s marine tourism in two years.