VietNamNet Bridge – A lot of commercial banks which have been recognized as the bests banks by economic journals turn out to have high bad debt ratios and unsatisfactory business results.

VietNamNet Bridge – A lot of commercial banks which have been recognized as the bests banks by economic journals turn out to have high bad debt ratios and unsatisfactory business results. 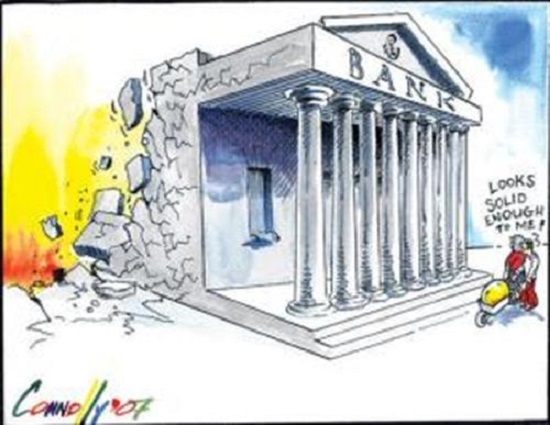 Having been recognized as the bank with the strongest balance sheet in 2013 by Asian Banker and the best bank in Vietnam in 2013 by Finance Asia, the third quarter report pointed out that Vietcombank’s finance situation is getting worse.

Though the bank’s bad debt ratio of 2.98 percent is still within the safety line, at 3 percent as stipulated by the State Bank, it is not good for the bank to let the bad debts get worse.

VietinBank, a labor hero, which has received “World Class” title of the 2013 Global Performance Excellence Award (GPEA), has reported that the irrecoverable debt in the third quarter of 2013 has increased by two folds to VND5.431 trillion, while the post tax profit decreased by 19.2 percent.

The “best domestic bank of Vietnam”--Military Bank, has also reported the bad debt ratio increase from 1.85 percent to 2.58 percent, of which irrecoverable debt accounts for 46.9 percent, a sharp increase of 52 percent in comparison with the same period of the last year to VND972 billion.

ACB’s bad debt ratio has increased to 3.34 percent from 2.5 percent earlier this year. Meanwhile, Eximbank, the Vietnamese best bank in 2013 as selected by Euromoney, has seen the bad debt ratio increasing to VND1.457 trillion.

Less famous banks have also shown an unsatisfactory situation. SHB, which has received the second-class Labor Medal, reported the bad debt up to VND5.072 trillion by the end of the third quarter.

Phuong Nam Bank, which has experienced a “reshuffle” with a lot of key persons having been replaced, has also had the bad debt ratio increasing sharply from VND1.317 trillion to VND1.651 trillion, which accounts for 3.79 percent of its outstanding debts.

The bank’s post tax profit decreased by 71 percent, if compared with the same period of the last year--mostly caused by the loss of VND44 billion from the securities investment activities.

In the third quarter, Navibank, in which Dang Thanh Tam, one of the most influential businessmen in Vietnam, was a member of the board of directors, made a modest post tax profit of VND2.6 billion--just equal to 40 percent of the same period of the last year. Meanwhile, the bad debt ratio accounts for 8.7 percent of the outstanding loans.

Sacombank has reported that its bad debt has decreased. However, the fact that big shareholders of the bank (like Tram Be and his son) wanted to withdraw capital from the bank and speed up the merger into Eximbank – the move that only unprofitable businesses do – has raised doubts about the finance report of the bank.

Nevertheless, the bad debt ratio increase reported by big banks is not a surprise at all. Prior to that, the State Bank of Vietnam admitted that the total bad debt ratio of the whole banking system has increased by 22 percent over the end of 2012.