All foreign players of the Binh Duong Football Club received “harassment” messages before the game against Dong Nai FC. The club leaders said they would ask the police to investigate the incident.

VietNamNet Bridge - All foreign players of the Binh Duong Football Club received “harassment” messages before the game against Dong Nai FC. The club leaders said they would ask the police to investigate the incident. 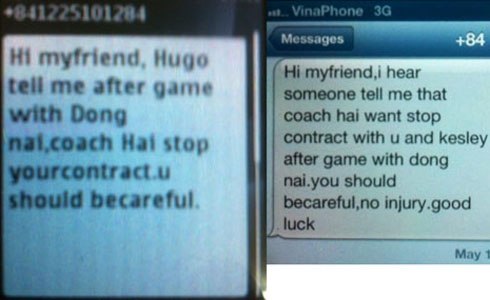 The message, written in English, said that the man named Hugo (the nickname of the acting chief of Binh Duong FC – Mr. Nguyen Thanh Quang) and Coach Le Thuy Hai will intervene to liquidate the contract with all foreign players after the game against Dong Nai FC.

All players who received the message reported the incident to the FC’s officials.

President Nguyen Minh Son of Binh Duong Club said: "It is true that before the match with Dong Nai, the players reported to me about the strange message. They could not avoid confusing and I had to encourage them a lot. Thankfully, the players were perspicacious so in the game with Dong Nai, they played their best and we won."

Son said: "Besides me and Mr. Quang, there are also many other officials who have always closely watched the club. We will discover any problem immediately. Perhaps someone hates him (Quang) and wants to destroy him."

"In the case of Nguyen Rodgers, I feel lucky that we did not buy him. That midfielder played not very well in the game with Binh Duong. Perhaps our strict medical regulations made Rodgers panic and left Binh Duong at night," Son explained.

Binh Duong FC’s top official also said that the team would ask the police to identify the message sender, who intended to harass Binh Duong FC.