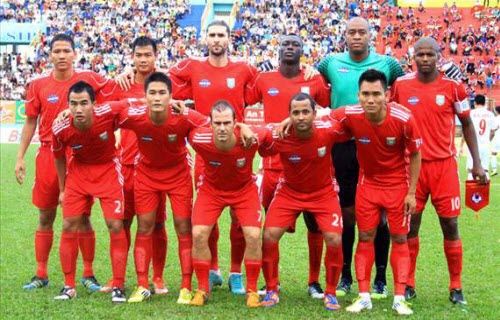 Binh Duong will meet Jeonbuk Motors of South Korea, Shandong Luneng of China and the play-off winners from the East Asian region.

Ha Noi T&T are in the second round of qualifiers, and will meet Persib Bandung of Indonesia on February 10 at Hang Day Stadium. If they win, they will meet FC Seoul finished third in the 2014 K-League qualifiers.

The AFC event will officially begin on February 24 next year, with 32 teams divided into eight groups of four. The winners and runners-up from each group will advance to the last 16.

Nam knocked out of US event following third round defeat

He lost to American Reilly Opelka 6-4 7-6 in the third round. Opelka will meet his teammate Alex Ybakov in the quarter-finals.

In the boys' doubles, Nam and Mate Valkusz of Hungary were defeated by local duo Tommy Paul and Nathan Ponwith 6-3 7-6.

The annual tournament will wrap up tomorrow.

Defender Le Phuoc Tu has decided to quit the national football team after they lost to Malaysia 4-2 in the second leg of the ASEAN Football Federation – Suzuki Cup semi-final at My Dinh Stadium on Thursday.

The 30-year-old footballer said: "I can feel my age and it is time to give up my position for younger players. Saying goodbye to the national team, I will focus on competing for my club Binh Duong who will play in the AFC Champions League next year," said Tu.

Tu and the national team triumphed at the AFF Cup in 2008.

The event is part of the ongoing National Sports Games.

In weightlifting, Lam Thi Bich of Hai Phong took gold in the women's 58kg category with a total lift of 203kg.

Nine gold medals were awarded to track-and-field athletes yesterday, with the Military, Ha Noi and Thanh Hoa teams taking two each and HCM City, An Giang and Nam Dinh getting one each.

Ha Noi has been stable at the top of the rankings table with 132 medals. HCM City are second with 85, followed by Military with 45.