Located in Ninh Hai district, the southern central province of Ninh Thuan, the Nui Chua National Park is like a “gem” in a desert as it habours blue sea, white sand, colourful coral reefs, as well as magnificent caves. 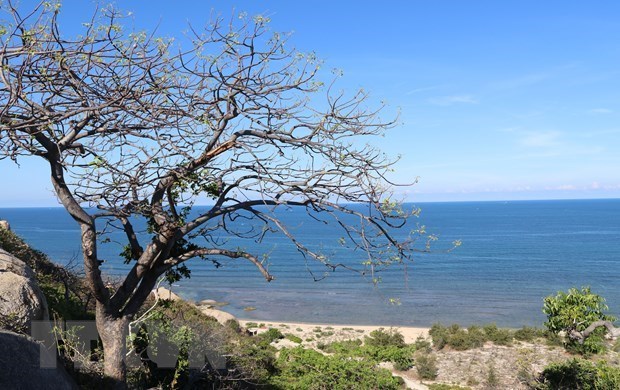 The park is known as an attractive ”3-in-1” eco-tourism destination as it is the confluence of forest, sea and semi-arid areas with rich biodiversity, providing the habitat for 1,511 plant species and 345 animal species, many of which are named in Vietnam’s Red Data Book and the IUCN Red List of Threatened Species.

Nui Chua lies on an uninterrupted mountain that is shaped like a turtle with its head turning to the south and the tail being the part of Xop Cape that stretches to Cam Ranh Bay. Looking from a distance, this mountain is like a turtle moving from the sea to the mainland.

Thanks to the combination of forest, sea and semi-arid spaces, the park habours 1,532 vascular plant species of five phyla. Among them, Michelia species number 1,237, accounting for 96.64 percent of the total, followed by Pteridophyta (25 species), and Pinophyta (12 species).

In particular, it is home to two species endemic to Indochina, black shanked douc langur and Germain's peacock-pheasant, along with one endemic to Vietnam, Rhacophorus annamensis (a species of frog).

Besides, about 350 coral species and 188 seaweed species have been found in the Nui Chua National Park, which is also one of the few places in Vietnam providing nesting sites for sea turtles, including green sea turtle, olive ridley sea turtle, hawksbill sea turtle, and leatherback sea turtle.

Tran Van Tiep, Deputy Director of the park’s management board, said to bring into play the values of the local biodiversity and natural landscapes, many eco-tourism activities are being designed and organised such as tours to explore the sea, the forest or the semi-arid ecosystem that is the most unique of its kind in Vietnam.

The development of eco-tourism generates funding for biodiversity conservation, he said, noting that aside from sightseeing tours, the park has continued to create new tours in the forest and the sea such as coral diving trips, visits to turtle nesting sites, bird watching tours in the submerged forest, and tours of the stone blocks, Rai Cave and Vinh Hy Bay.

The formation of eco-tourism trips and sites must comply with the principle of not changing landscapes, causing negative impact on flora and fauna resources, decreasing biodiversity, or polluting the environment, and it must ensure genetic resources and biodiversity conservation in the Nui Chua National Park.

Additionally, the management board has paid attention to popularising knowledge about eco-tourism to its staff, visitors and local residents to help improve public awareness of environmental protection, according to Tiep.

He elaborated that it has boosted the study of several endemic and rare plant species, built an area for rescuing and conserving rare marine animals, stepped up waste treatment and provided livelihood support for residents in the national parks buffer zone.

Since 2016, it has contracted the protection of 6,198 hectares of forest out to 111 low-income households. It has also sent staff to give cow and goat farming guidance to help locals improve their livelihoods and reduce the reliance on forest resources to earn their living.

The Nui Chua National Park welcomed nearly 174,000 visitors in the first 10 months of 2019, according to the park’s management board.