The battle in the beer market is especially harsh in the high-end segment as Vietnamese breweries are now trying to target high-income earners.

VietNamNet Bridge – The battle in the beer market is especially harsh in the high-end segment as Vietnamese breweries are now trying to target high-income earners. 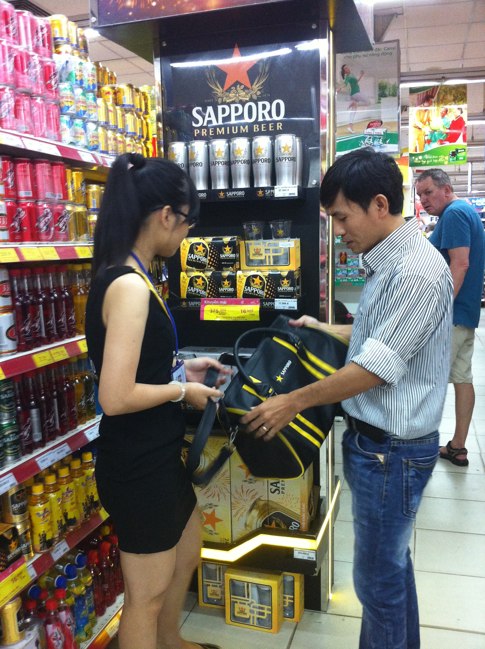 Sabeco, the largest Vietnamese brewery, planned to sell 1.4 billion liters of beer of different kinds in 2014. In order to fulfill the plan, the company launched new products such as Saigon Gold, Sai Gon Special and Sai Gon Lager, positioning them as high-end products, targeting “young and dynamic consumers”.

“The high-end market segment has a lot of  potential,” a Sabeco’s representative explained.

Prior to that, 80 percent of Sabeco’s products, bearing the brand “333” and “Sai Gon Do” (Red Saigon), had medium and low prices.

As expected, Sabeco’s bottled Saigon Special has been selling well since the day it was marketed, with six-month sales reaching 79.6 million, a surprisingly high figure, if noting that only 32.5 million liters of beer were consumed in the entire year of 2012.  Meanwhile, the canned Saigon Special sales reportedly reached 29.6 million.

Analysts noted that the recent moves taken by Sabeco all showed its strong determination to penetrate the high-end market segment.

According to the HCM City Securities Company (HSC), the Ministry of Industry and Trade has submitted to the Prime Minister a plan to sell 30 percent of the 89 percent of shares the state holds in Sabeco to foreign strategic partners, and sell another 19 percent of shares to other partners in 2014 and 2015 at the latest.

After the shares are sold as proposed, the state’s share proportion in Sabeco would decrease to 40 percent. The foreign strategic partners may include Asahi, Kirin, SAB Miler and Heineken.

Thus, Sabeco has reasons to follow the strategy on developing high-end products. With 24 projects already invested and to be invested, the company’s production capacity will exceed 2 billion liters.

Hirofumi Kishi, general director of Sapporo Vietnam, which has been in Vietnam for three years, said Sapporo made a correct decision to target the high-end market segment from the very beginning when it entered Vietnam.

Sapporo’s beer output in 2014 was reportedly double that of 2013, while its products including 330 ml bottled, 330 ml canned, 650 ml canned Sapporo Premium and 20 liter fresh Sapporo Premium, are available at 5,000 shops and restaurants.

Michel de Carvalho, the owner of Heineken, also a high-end brand, is optimistic about  business in the Vietnamese market.

Heinekin's sales exceeded the 200 million liter threshold in 2010, and it is expected that Vietnam will become the world's largest Heineken beer consumer in 2015.