The Ministry of Planning and Investment (MPI) has submitted to the Prime Minister a plan to assign the Airports Corporation of Vietnam (ACV) to develop the T3 terminal at Tan Son Nhat Airport.

The ministry has officially shown its view about the implementation of T3 project, with the capacity of 20 million passengers a year, after one year of discussion among ministries and branches. 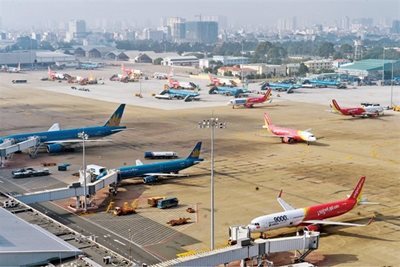 T3 will be a terminal for domestic travelers at Tan Son Nhat Airport. The VND11 trillion project is expected to be implemented within 37 months.

A question has been raised about ACV arranging enough capital, if the government allows ACV to implement both the T3 terminal and the first phase of Long Thanh Airport, which has investment 10 times higher than T3.

“As such, ACV can mobilize long-term capital of VND23.643 trillion to implement the project, ensuring capital mobilization capability for the project,” MPI said.

However, ACV has received approval from the government and National Assembly to build the Long Thanh Airport (the first phase) with the investment capital of $4.779 billion, or VND111.689 trillion. This is a huge project comprising a terminal with the capacity of 25 million passengers and other important items.

There won't be a government’s guarantee, while 70 percent of capital would be sourced from commercial loans ($2.6 billion).

Experts have shown their doubts that ACV can arrange huge capital for both projects.

T3 project, if approved, would kick off in 2020, and the first phase of the Long Thanh Airport is also expected to start at the same time and last until 2025.

This means that ACV can implement the Long Thanh project (estimated at VND36.607 trillion, or 37 percent of Long Thanh’s capital.

Regarding T3 Terminal at Tan Son Nhat, it is estimated that the EIRR (economic internal rate of return) is VND21.952 trillion, while the benefit/cost ratio is 2.55. As such, according to ACV, the project is feasible.

The exploitation capacity of Tan Son Nhat Airport has exceeded the designed capacity by 1.13-1.56 times.

International financiers may have no room to join Long Thanh International Airport project, with the lack of a government loan guarantee creating a major obstacle for would-be investor Airports Corporation of Vietnam to ensure bankability.

To acquire 100 percent of shares of the Airports Corporation of Vietnam (ACV), the state will have to buy more than 100 million shares at the price of VND79,000 per share.