Are delivery services earning big money during the pandemic?

Hanoi asked for permission to close shops and some business activities to fight against Covid-19 on March 25.

Later, the Prime Minister released a decision on social distancing that began on April 1. Shippers then became the only link connecting buyers and sellers. 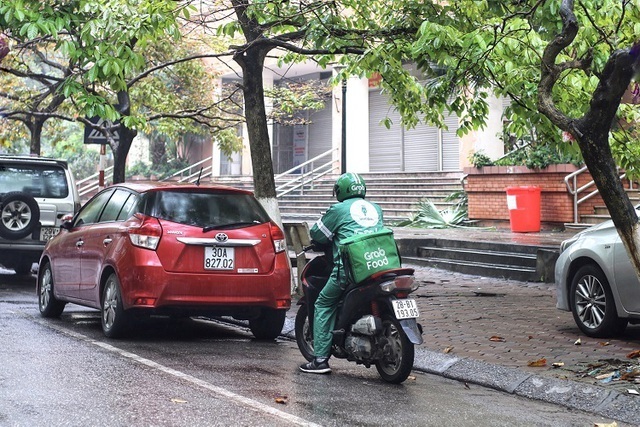 Professional delivery services have to follow professional procedures. The workers receive base salaries and remuneration from companies.

Shippers working for professional delivery firms, in addition to fixed salaries, get commissions, about VND3,000-4,000 per order. If they work hard, a shipper can fulfill 30-40 orders a day.

Meanwhile, freelance shippers are partners of delivery apps or fast food ordering apps, and they are affected more by the pandemic.

Many shippers denied they were earning far more money these days, saying that the demand for shipping services had not increased as much as people thought. The number of orders has decreased compared with the pre-social distancing time.

Thanh Hiep, 26, a shipper in Hanoi, said many shops closed their doors and stopped operation after the Prime Minister’s decision on social distancing. Also, shippers now have more and more rivals because many workers in other business fields lost jobs and joined delivery services.

Hiep said a shipper can fulfill 10-15 orders a day on average and 20 orders on a rush day. He had 20-25 orders a day in the past. As such, he can collect VND300,000 a day and has to spend a part of the amount on petrol and motorbike depreciation.

An analyst said that shippers don’t make big money, but the career can bring a stable income.

Dinh Doanh, 30, said he previously worked for a Japanese factory in the suburbs of Hanoi. He decided to become a shipper after he was told to stay at home when the factory halted operation. His wife has also become redundant in the crisis.

Doanh said he is not afraid of working hard, but he complained that being a shipper is a risky career because he has to contact many people every day.

After many consecutive days of recording no new cases of COVID-19, social distancing regulations were eased in Hanoi at midnight on April 23. However, estaurants still have to separate tables at a safe distance. Shopping centers and supermarkets also have to ensure proper distancing.

Vietnam’s startup makes delivery drone, gets patent in US

Established in April 2019, Drone Pro Vietnam is a company operating in the field of hi-tech air transportation. The company develops flight technology in combination with automation.

Vietnam, US cooperate to expedite delivery of protective suits for COVID-19 fight

The US Embassy in Hanoi said on April 8 that the Governments of the US and Vietnam have worked together to expedite the delivery of made-in-Vietnam personal protective equipment to the US.