The international tourist market may need 2-3 years to recover to 2019 levels, while the domestic market can recover strongly as soon as the epidemic is under control, according to experts from aviation organisations and Vietnam Airlines.

“Vietnam's aviation market is forecast to resume to the same performance of 2019 by 2023 in an optimistic scenario and by 2024 in a more cautious scenario,” said Dang Ngoc Hoa, chairman of Vietnam Airlines' Board of Directors.

To achieve this, Vietnam Airlines hopes that the Government, ministries and sectors would continue helping the domestic aviation industry to overcome difficulties this year and create favourable conditions for future recovery, Hoa said.

Dinh Viet Thang, director of the Civil Aviation Authority of Vietnam, said the domestic aviation market was expected to improve in the second half of 2021 when the COVID-19 vaccine rollout is accelerated in Vietnam and abroad.

Many key markets for Vietnam's aviation industry such as Northeast Asia and Europe could be able to create herd immunity as a basis for gradually reopening international aviation transport operations at the end of the third quarter or the beginning of the fourth quarter 2021.

The Vietnamese aviation market is expected to recover from the middle of the third quarter of 2021 with a target of serving 70 million passengers at Vietnam's airports in 2021, Thang said.

Specifically, Vietnam Airlines will officially implement a trial of the IATA Travel Pass on two flights numbered VN301 from Narita Airport (Tokyo, Japan) to Da Nang on July 15 and July 23.

Thang said that the biggest difficulty for airlines is financial. To revive the airlines at this period, the Government's support is very important to create conditions for the airlines to have the capital to restore services.

"The Government’s financial support is only to encourage the airlines to maintain operations, the most important thing is still the efforts of the airlines themselves," Thang told the Vietnam News Agency.

The Ministry of Planning and Investment has proposed the Government issue a supportive mechanism with interest rates of about 4 percent for banking loans in 2021-2023 for the airlines. The loans would help the airlines to maintain operation now and then recover business in the future.

The pandemic situation in the world is still complicated with new outbreaks and new variants of the SARS-CoV-2 virus, while the deployment of vaccination programmes globally has been slower than initially expected.

Due to the impact of the pandemic, the global economy has shown signs of recession and people's incomes are affected, reducing travel demand in the long term, especially by air.

Arrivals to Vietnam by air are now almost exclusively foreign officials, experts and repatriates, with foreign tourism wiped out.

According to the Civil Aviation Authority of Vietnam (CAAV), in the first six months of 2021, Vietnam's airports received 26.8 million passengers, down 19.4 percent year on year, including 145,000 international passengers (down by 97.9 percent) and 26.7 million domestic passengers (up by 1.4 percent).

The CAAV also said Vietnamese airlines companies had used most of their fleets for domestic routes, with the frequency and number of routes skyrocketing.

The number of domestic routes operated by Vietnamese airlines has even hit 62, ten more than in 2019. 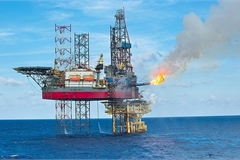