The Vietnamese fashion market has been busy in recent years with the presence of big players in the industry.

South China Morning Post has reported that since US President Donald Trump has taken office, a number of international fashion brands such as Uniqlo, Levi’s, Crocs, Ralph Lauren, Calvin Klein and Tommy Hilfiger have relocated their production bases out of China. 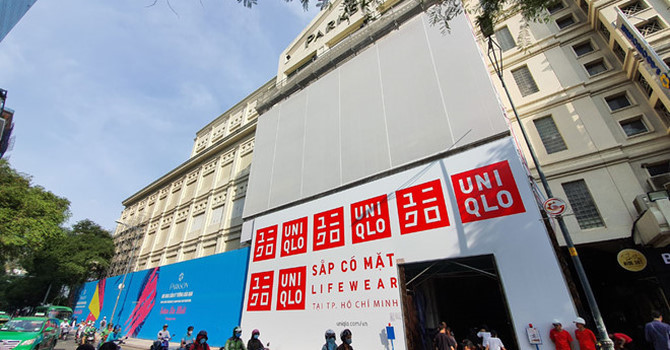 However, the increased labor cost and inequality between Chinese and foreign enterprises were the real causes for the brands to leave China even before the breakout of the US-China trade war.

The newspaper commented that, for fashion brands which care about tariffs, the only choice is relocating their production bases from China to other countries.

Uniqlo has officially announced the opening of its first fashion store in district 1, HCM City, in December 2019. One year ago, the group set up Uniqlo Vietnam, a 100 percent owned firm.

Prior to that, H&M announced revenue of VND763 billion for 2018, which was four times higher than in the first year of operation in Vietnam. After two years, H&M in late August opened the fourth store in HCM City, or the seventh in the country.

Zara, which came to Vietnam sooner, reported revenue of VND1.7 trillion from two stores in Hanoi and HCM City in 2018, a twofold increase compared with 2017. The revenue in Vietnam was four times higher than that of the Thai market.

While foreign fashion brands reap fruit in Vietnam, Vietnamese brands have had to pull back in the home market.

Vascara, the footwear and bag retail chain, was recently sold to Stripe International from Japan after 10 years of operation during which 134 shops across the country were built. The Japanese buyer also acquired the controlling stake in NEM in 2017.

In 2018, Elise Fashion, the Vietnamese fashion brand for office workers, also received investment from Japan. Other Vietnamese brands shut down or scaled down their operation, such as Foci, Blue Exchange and Nino Maxx.

Robert Tran, CEO of RBNC, commented that Vietnamese are industrious and meticulous, but the country focuses on doing outsourcing and implementing big orders for export but doesn’t make enough investment in design.

Popular women clothing brand Seven.AM has closed its stores in Hanoi after authorities seized thousands of products for investigations into their allegedly replacing made-in-China labels with Vietnamese alternatives.

The Hanoi General Department for Market Management on Tuesday reported that it had seized more than 9,000 products of the fashion brand SEVEN.am.