Vietnamese enterprises are advised to build better business strategies after the US slapped huge tariffs on Vietnamese steel. 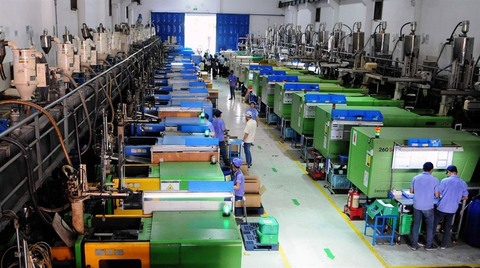 Components are made at the Cat Thai Manufacturing & Trading Co Ltd in HCM City. Vietnamese enterprises are urged to draw up appropriate business strategies to use domestic raw materials or other sources.

On Tuesday, the US Department of Commerce (DOC) announced it would impose duties of up to 456 per cent on the Vietnamese cold-rolled steel (CRS) and corrosion-resistant steel (CORE) export products made from materials imported from Chinese Taiwan and South Korea.

This could have a huge detrimental effect on Viet Nam's steel industry which as of April this year, exported nearly 2.8 million tonnes of steel, up 13.7 per cent against the same period in 2018

Foreign Ministry spokesperson Le Thi Thu Hang told reporters on Thursday that businesses should shift to using domestic raw materials or other sources as importing countries, including the US, may issue stricter regulations on trade defence. .

Hang said relevant agencies would exchange information with the US to protect legitimate rights and interests of enterprises, in accordance with the laws of Viet Nam and the World Trade Organisation (WTO), and prevent fraudulent acts of origin.

Minister of Industry and Trade Tran Tuan Anh at the National Assembly cabinet on the same day said: "We import hot rolled steel from these places and there is a process of change. Previously, the US accepted this transformation process but now they think the process is negligible. The tax therefore must be increased, up to more than 400 per cent,” Anh said.

He said authorities are planning to co-ordinate for the evaluation of products imported from other countries.

Agencies would work with partners to provide guidance for businesses, avoiding products from Viet Nam to be subject to commercial sanctions, he said.

In the other direction, the issuance of certificates of origin would be re-tightened for many products, he added.

Regulation on ‘Made in Viet Nam’ products

The Ministry of Industry and Trade (MoIT) has proposed the Government promulgate regulations on Vietnamese goods and ‘Made in Viet Nam’ products as there are no specific rules on the issue.

Deputy Minister of Industry and Trade Do Thang Hai made the statement at a press briefing held in Ha Noi on Thursday, answering questions relating to potential wrongdoings at Asanzo Viet Nam Electronics JSC. The firm has reportedly been selling finished products imported from China labelled as “Made in Viet Nam” goods.

He said the draft would collect opinions from ministries and people to prevent trade fraud, adding that the ministry has been actively co-ordinating with the Ministry of Finance (MoF) to clarify the issue.

“Prime Minister Nguyen Xuan Phuc assigned the MoF to act as the focal point to co-ordinate with concerned ministries and agencies, including the MoIT, to inspect and report to the Government. Currently, the two ministries have co-operated in a positive way to implement the direction of the PM,” he said.

Sharing the opinion, Tran Thanh Hai, deputy head of the ministry’s Import-Export Department, said in Viet Nam the labelling of goods origin is carried out in accordance with the Government Decree 43/2017. Accordingly, the regulation requires all goods to be labelled. On that label, there is some mandatory information about the name of producers, individuals or organisations and origin of goods.

The Decree also stipulates that enterprises, organisations and individuals circulating goods must determine the information to put on their labels and take responsibility for recording the origin of goods.

However, he said Viet Nam has participated in various free trade agreements (FTAs). These agreements contain provisions on goods that enjoy tariff preferences but do not yet have provisions applicable to brands in the domestic market.

He gave an example that Viet Nam is participating in the ASEAN free trade area. The condition for granting a certificate of origin is that 40 per cent of the content of a product is produced in ASEAN.

“This means that a product can have 10 per cent of Thailand, 10 per cent of Indonesia, 15 per cent of Malaysia and only 5 per cent of Viet Nam. Thus, we still have not had a clear regulation on how to determine the ratio of goods to be considered Vietnamese goods,” he said.

He added that the ministry would publish the official draft on its websites to collect ideas in the future. — VNS