Cashew exports are expected to surge in the latter half of the year once the COVID-19 pandemic is put under control.

But the cashew industry will still have to lower its export target of 4 billion USD for this year.

According to the Ministry of Agriculture and Rural Development, exporters shipped 86,000 tonnes of nuts in the first three months of the year for 609 million USD, down 4.7 percent year-on-year in value despite an 8.2 percent rise in volumes.

The US, the Netherlands and China remained the country’s top three biggest import markets, it said.

The pandemic outbreak in most of cashew importing countries has caused difficulties for Vietnamese firms exporting the nuts.

Pham Van Cong, chairman of the Vietnam Cashew Association, said the industry is unlikely to achieve its export target for the year of 4 billion USD.

The association is conducting a comprehensive assessment to make appropriate adjustments to the target, he said.

The ministry’s Agro Processing and Market Development Authority said there has been good progress in controlling the pandemic in China, and exports to the market have shown signs of improvement.

Analysts said exports would recover after the pandemic is contained, and so enterprises would need to make plans to boost exports in the latter half of the year.

They said the EU would be a promising export market.

Germany has for instance high demand for small and medium-sized cashew nuts for use in the food industry, and Vietnamese firms are competitive in these varieties, they said.

The Ministry of Industry and Trade has forecast cashew exports to Germany to rise in the second half of the year when the pandemic is controlled and the EU-Vietnam Free Trade Agreement (EVFTA) comes into effect.

They also would need to enhance trade promotion activities online and connect businesses online now so that they could quickly revive exports as soon as the pandemic is controlled, it said.

Vietnamese enterprises imported 161,000 tonnes of raw cashew at a cost of 246 million USD in the first three months of the year, a year-on-year decrease of 29.5 percent in volume and 37.9 percent in value.

Tanzania, Indonesia, Cambodia, the Ivory Coast, and Nigeria were the biggest suppliers./.VNA

Cashew exports are expected to surge in the latter half of the year once the COVID-19 pandemic dies down. 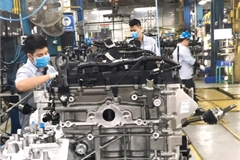