The prices of both raw and cashew nuts are falling dramatically, while requirements on exports have become increasingly strict.

Many cashew processors say that they are incurring big losses as they bought materials in the past at high prices and are exporting finished products at low prices now. 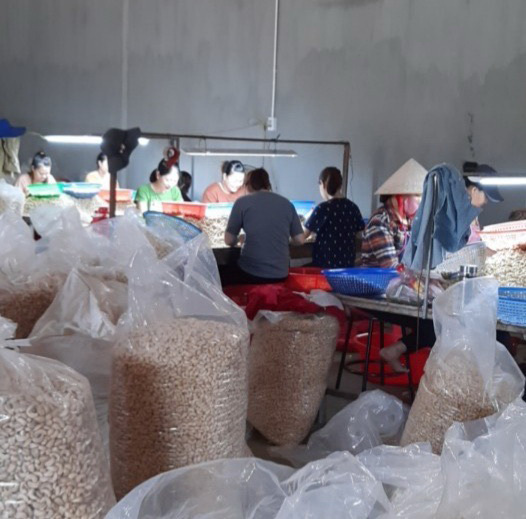 At the end of 2019, the import price was relatively high, at $1,200 per ton. But the price unexpectedly fell to $1,000 per ton earlier this year and to $900 at some moments. The export price of finished products has also decreased, causing exporters to suffer.

Even with the export price decreases, it is difficult to find buyers. A client signed a contract at $6,000 per ton, but later demanded to lower it to $5,500.

According to the Vietnam Cashew Association (Vinacas), Vietnam imported 635,000 tons of raw cashew, a 12 percent decrease compared with the same period last year, 10-year low. Because of Covid-19, the transportation of goods from West Africa is interrupted regularly.

Deputy chair of Vinacas Dang Hoang Giang said the unexpected decrease of both raw and cashew nut prices has made it impossible for enterprises to balance production costs. As a result, they have had to cut the processing output or suspend operation.

Not only processors, but farmers have also suffered. Vinacas reported that the domestic raw cashew output increased in the first seven months of the year, but farmers’ incomes decreased considerably because of market price fluctuations.

The exports to the US, which buys 32 percent of Vietnam’s total exports, increased by 25 percent in quantity and 10 percent in value. Meanwhile, exports to China dropped by 30 percent and export turnover by 44 percent.

The US, China and Europe are the three biggest markets for Vietnam’s cashew nut exports.

Analysts said that the figures about exports in H1 did not truly reflect the market situation. The volume of export products with no specific destinations put in bonded warehouses is very high.

As clients tend to be choosier in quality, trade dispute cases have occurred and many export consignments were refused.

Vinacas said global demand is now unpredictable because of Covid-19, and cashew nuts are not essential goods.

The cashew industry had just overcome the crisis in late 2018 and early 2019 when it was dealt another blow from Covid-19.