Vietnam’s catfish exports have seen a sharp decline because of trade barriers and price fluctuations in the world market.

The Vietnam Association of Seafood Exporters and Producers (VASEP) reported that Vietnam’s catfish exports in November decreased by 20 percent compared with the same period in 2018. 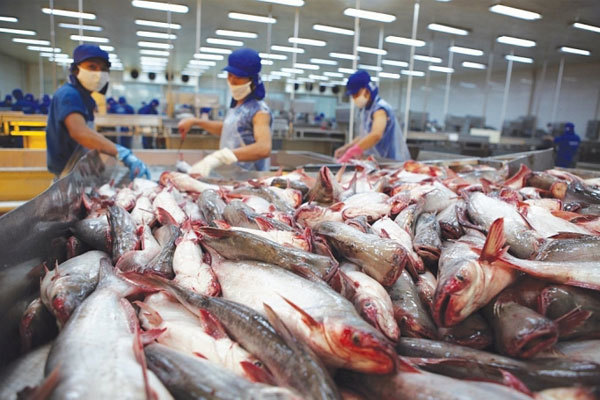 The export value decreases occurred in most key markets, while China-Hong Kong was the only market that helped prevent export value from falling too sharply. By the end of November, the total catfish export turnover had reached $1.81 billion, a decrease of 11 percent compared with the same period last year.

The value of catfish exports to the US dropped by 60.2 percent in November and a 36 percent decrease was reported for the EU market.

In the second half of 2019, the catfish export turnover to some European markets, including the Netherlands, UK, Germany and Belgium, was unstable and the two-digit decline was seen in some months. This caused total export value to the EU decrease gradually from the positive growth rate in early 2019 to the minus growth rate in late November.

The technical and trade barriers and the sharp fall in catfish material prices in the domestic market which have direct impact on the export prices all have also led the catfish export value to the EU decrease in the first 11 months.

As for ASEAN, the total catfish export value to the market was $180.9 million, down by 1.4 percent. Meanwhile, the export value to Thailand increased by 2.8 percent, to Malaysia by 12.5 percent.

China-Hong Kong remained the best export market for Vietnam in the first 11 months of 2019 with export turnover of $66.11 million, accounting for 37.8 percent of total catfish export turnover.

Because of the unsatisfactory signs from many key markets, VASEP estimated that the total catfish turnover of 2019 would decrease by 15 percent compared with the previous year.

Analysts believe the situation will be better in 2020 thanks to the EVFTA.

A series of problems are affecting Vietnam’s catfish industry, including a sharp fall in catfish material price and decrease in breeder quality. The industry has lost its monopoly. On the world market.

The catfish price has been decreasing sharply this year after two years of staying at high levels.