Vietnam’s coffee export price has dropped to a 10-year low and is continuing to slide. Analysts believe the price won’t go up in the last months of the year as supply is increasing.

The Ministry of Agriculture and Rural Development (MARD) reported that Vietnam’s coffee exports in the first 10 months of the year decreased sharply. 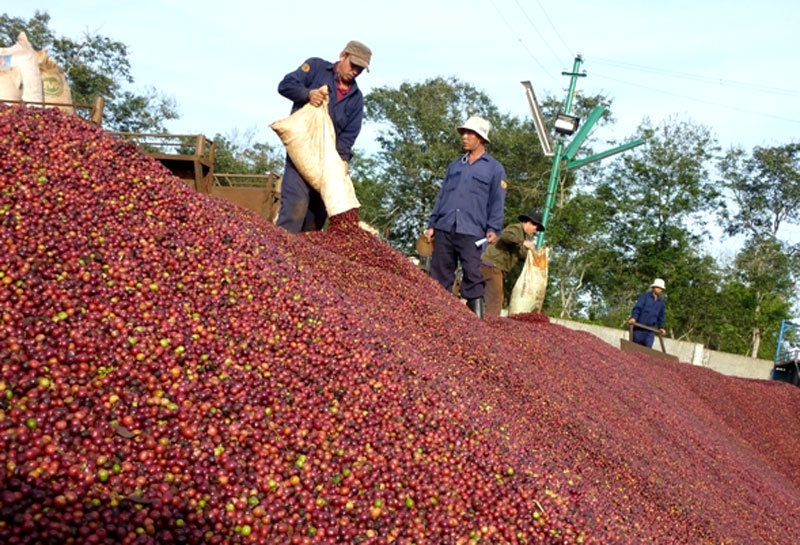 With export amount of 1.35 million tons and export turnover of $2.33 billion, this represented a decrease of 14.6 percent in volume and 22.3 percent in value compared with the same period last year.

Germany and the US continued to be the two biggest export markets for Vietnam in the first nine months of the year which consumed 13.3 percent and 8.6 percent of total exports, respectively.

However, except the Filipino market which had export value increasing by 15 percent, other major export markets had a consumption level lower than the same period last year.

The coffee price in the world decreased sharply in October. Robusta with delivery in November 2019 in London was traded at $1,212 per ton, down by $108 per ton.

MARD’s report pointed out that the coffee price has decreased because of oversupply globally. Besides, the economic growth slowdown globally and the trade tension escalation are also behind the price decrease.

The domestic market has also become gloomy following the global market decline. Robusta price in the Central Highlands provinces has decreased by VND1,900-2,300 per kilogram to VND30,800-31,300 per kilogram compared with September. Robusta FOB price at HCM City ports has fallen by $104 per ton to $1,366.

Vietnam’s average export price in the first nine months of 2019 was $1,717 per ton, down by 9.6 percent in comparison with the same period last year.

According to Vicofa, the coffee price at this moment is the lowest in the last 10 years. In material growing areas, the coffee is traded at VND30,000 per kilogram.

Farmers are meeting difficulties and hesitant to prepare for a new crop. Meanwhile, export companies have cut export volume as they anticipate risks.

MARD predicted that the coffee price will be stagnant until the end of the year as Vietnam is entering the new harvest, while Brazil’s inventory level is high. The country is trying to boost sales as the reais depreciation is supporting exports.

In late October, Vicofa gathered an urgent meeting with the Club of Vietnam coffee exporters to discuss solutions to ease difficulties for farmers and export companies.

Export companies have asked Vicofa to propose to the government and commercial banks to extend the debt payment deadline for farmers and provide loans at preferential interest rates so that export companies can store coffee in the high harvest season (December 2019).

Coffee stockpiling recommended for Vietnam due to low prices

The harvest season is underway at coffee plantations in the Central Highlands, but lower prices than previous years are causing problems for farmers.