The high growth of accommodations, especially 1-3 star hotels, has caused a hotel oversupply in Da Nang.

Just within the first six months of 2019, Da Nang added 100 more accommodation facilities with 6,000 rooms. More 1-3 star hotels have arisen in the last three years, especially in coastal areas in the districts of Son Tra and Ngu Hanh Son. 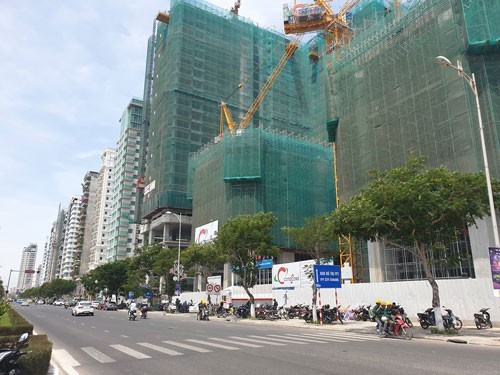 Hotels are in close proximity to one another on the streets of Vo Nguyen Giap, Ha Bong, Ho Nghinh and Nguyen Van Thoai. There are up to 50-70 hotels in a short section of road, just 500 meters long.

Of these, 1-3 star hotels are the majority. According to the Da Nang Tourism Promotion Center, there are 650 1-3-star hotels out of 820 accommodation facilities.

Meanwhile, there are only about 80 4-5 star hotels. The remaining are high-end resorts, villas, standard apartments, and guest rooms with standard rooms for lease.

The oversupply explains why the room occupancy rate in the first six months of 2019 in Da Nang was low, just 50 percent. The rate was about 60 percent for 4-5 star hotels.

The oversupply not only has made it more difficult to do business, but also put pressure on the urban infrastructure system, especially transport.

A high ranking official of the Da Nang Construction Department commented that the rapid increase in number of accommodation facilities could be seen as a success in attracting investment into tourism real estate projects. However, he admitted that the high growth rate has caused problems to infrastructure, environment, air, water supply and waste treatment.

Huynh Tan Vinh, CEO of Furama Resort, saud that Da Nang has low-end hotels in abundance, but fewer high-end hotels and resorts. This has led to stiff competition among hoteliers and the low hotel room occupancy rate.

Vinh believes that now is the time for Da Nang to restrict the granting of licenses to 1-3 star hotels. The municipal authorities also need to give predictions about the number of travelers and supply of hotel rooms, so that investors can have more accurate information.

At present, the licensing depends on state management agencies, especially the Construction Department.

Da Nang has been recognized as the most livable city in Vietnam. It is also an attractive destination for travelers in the central region.

Rampant hotel development is a waste of national resources

The hotel room redundancy is deepening in various parts of the country, especially Nha Trang City in Khanh Hoa Province, despite, paradoxically, a steep rise in international visitor arrivals in the past few years.

A lot of people from China, South Korea, even Japan are buying resort properties in Vietnam, which is considered a sign of an attractive market to investors.

Amid a protracted COVID-19 outbreak, socio-economic data in October showed the contraction has bottommed out and Vietnam's economy has made positive changes, the World Bank in Vietnam said.