The Vietnam Poultry Livestock Association, which met late last week, expressed its concern about the massive imports of chicken, saying that it will kill the domestic husbandry industry.

Phan Van Luc, secretary general of the association, said many localities are stepping up poultry farming. The number of fowl has increased by 14.28 percent (3 million) in Dong Nai province, 11.8 percent in Tien Giang, 42.82 percent in An Giang and 12.61 percent in Soc Trang. In Long An, the number has increased by 2-3 times in some districts, while in Tra Vinh, there are 6.2 million fowl, a twofold increase. 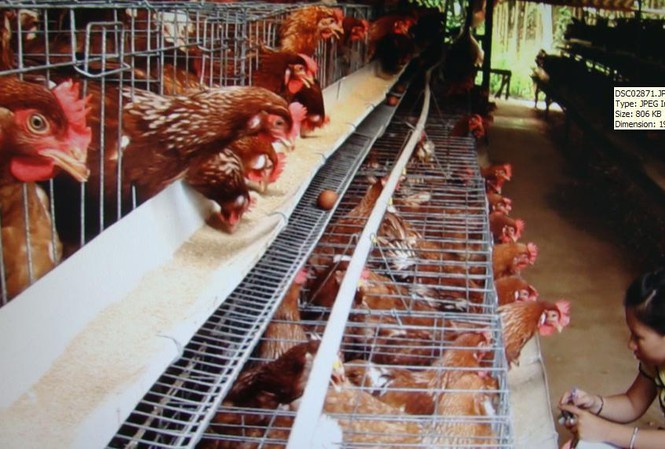 Meanwhile, the fowl price has decreased since February, which Luc thinks is unusual. The price of white-feather chicken dropped to VND12,000-14,000 per kilogram in early September in the south and VND19,000-21,000 in the north.

The sharp fall is attributed to the increase in imports.

According to Nguyen Thanh Son, chair of the Vietnam Poultry Livestock Association, Vietnam imported 98,462,000 tons of poultry meat in the first eight months of the year, four times higher than the same period last year.

“This is a sharp increase and is the reason why the consumption of domestically raised chicken is low,” he said.

The decision to import poultry meat in large quantity may have been caused because of the inaccurate figure about domestic husbandry.

According to Nguyen Thanh Son, chair of the association, the General Statistics Office (GSO) estimates 1.5 farrows of chicken a year and the calculation is unreasonable.

With 1.5 farrows a year, Vietnam has chicken output of 839,573 tons. But in reality, there are 5-6 farrows a year, which means that the real output is much higher than estimated.

“The total is 1,204.2 million, or 2.4 million tons of live poultry meat a year. With the output, Vietnam is among the 10 biggest fowl producers in the world,” Son said.

There is a big difference between the figure shown by the Vietnam Poultry Livestock Association and the figure released by GSO (2.88 times). The output of chicken provided in 2018 alone was 2.2 times higher than the officially released statistics.

Regarding the egg output, GSO said in 2018, Vietnam produced 11.5 billion eggs, while the association said the figure was 12.2 billion.

How to protect domestic farming?

“The chicken imports in the first eight months of the year were equal to 55 million fowl, equal to 55 percent of white-feather chicken output raised domestically. This is alarming,” he said.

Cao Van Khanh, director of Cao Khanh Poultry Breeders, said the massive imports have had negative impact on livestock development in Vietnam, and measures are needed to protect farmers.

US chicken dirt-cheap in Vietnam

Vietnam has increased imports of chicken from the US which have the surprisingly low price of VND18,000 per kilogram.