If all barriers are removed, Vietnam’s GDP (gross domestic product) in 2021 may reach 2-2.5% in accordance with the optimistic projection. 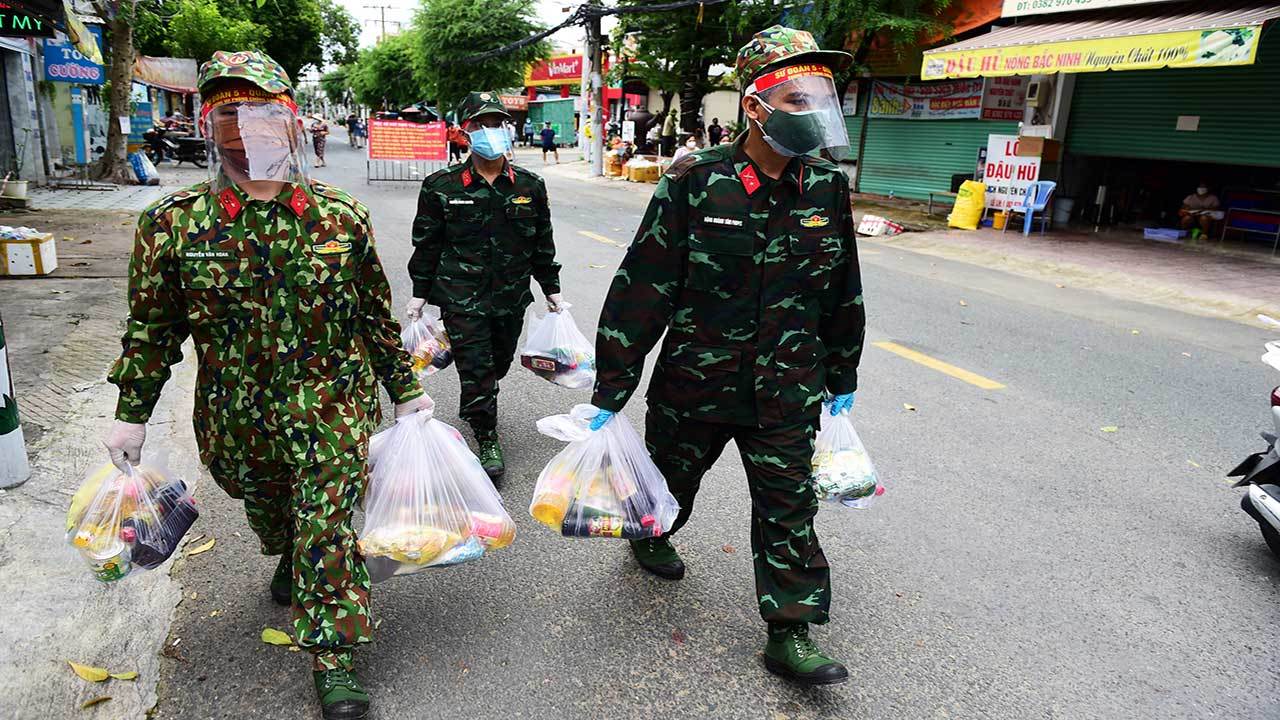 Military personnel helping people in locked down areas in HCMC

Otherwise, it is very likely that the worst-case scenario similar to the third quarter will recur. Vietnam will then have to face an economic crisis and go on a more strenuous and costly path to recover.

While many countries worldwide were vigorously restarting their economic recovery, Vietnam in the third quarter was at the bottom of the economic crisis sparked off by the Covid-19 pandemic.

The economic growth rate in the first nine months of the year reached only 1.42% year on year, the lowest rate since Vietnam began to make public this economic indicator. However, to better visualize the devastation of the pandemic as well as swingeing disease control measures, we should look at statistics recorded in Q2, not those of the Jan.-Sep. period. In the third quarter, Vietnam’s GDP was estimated to fall by 6.71% compared with the same period last year, of which the service sector declined by 9.28%, and the industry and construction sector went down by 5.02%. Only the agro-forestry-fishery sector was able to rise slightly by 1.04%.

According to unofficial statistics collected by the southern representative office of the Ministry of Labor, Invalids and Social Affairs, hundreds of thousands of firms and millions of workers had to stop operation, or be jobless or underemployed. Of the 18 million people of working age in 19 southern provinces, only a third of them were fully employed. Production costs, from fuel to basic materials remained high. Coupled with the hundreds of thousands of workers fleeing from the southern production centers, these all are ill omens of a bumpy road ahead to economic recovery.

All components of aggregate demand are weak

The aggregate demand of the economy also indicates a similar decline. Total retail sales and consumer service turnover in Q3 sank by 28.3% year on year. Of this, travel services plummeted by 94%, whereas accommodation, food and other services fell by half. Essential commodities were the only sector to retain last year’s level. Likewise, in the third quarter, lockdowns and mobility restrictions among localities sent passenger and goods transportation plunging by 70% and 30%, respectively. International visitors to Vietnam during this period almost vanished.

In addition, total social investment according to current prices in Q3 also declined by 9.5% with the State and foreign investment sectors falling more than 20%. The number of foreign direct investment projects in the first nine months plunged 37.8% in quantity. Although registered investment capital rose by 20.6%, disbursed capital fell by 3.5%.

International trading has continued to remain encouraging so far this year due to possible effects of new free trade agreements plus the inflows of foreign investment into Vietnam in recent years. However, the growth rate has tended to decline over the past quarters. Export sales in the first nine months rose 18.8% year on year. Yet the growth rate in Q3 was only 5.2% compared with Q3-2020. While the import value of the first nine months rose 30.5% year on year, that of the third quarter increased by only 22.6% from the year-earlier period.

After years of trade surplus, Vietnam’s trade balance in the first nine months of 2021 suffered a deficit of US$2.13 billion. Some orders have been shifted away from Vietnam as producers here failed to meet delivery schedules due to domestic extreme measures for pandemic containment. Meanwhile, the foreign indirect investment sector accounted for 74% of Vietnam’s total export sales. The United States remained Vietnam’s biggest importer, accounting for 29% of the total; and China was still the biggest exporter which made up 33.5% of Vietnam’s total imports.

Prices are stable, but sneaker waves are present

The average CPI (Consumer Price Index) in Q3-2021, which rose 2.51% from Q3-2020, was rather low compared with that in recent years. Nonetheless, the economy’s deflator climbed more than 23%, indicating that the inflation pressure is enormous. Hikes in prices of fuel and input materials, ranging from tens of percent to several times, plus the costs of logistics and pandemic fighting measures, have boosted production costs. Sooner or later, these costs will be factored in consumer prices once aggregate demand fully recovers. What’s more, the disruption of good distribution may force farmers to think twice and reduce cultivation, which may push up food prices when the year comes to an end.

The leeway for the monetary policy is modest. Aside from inflation pressure due to cost-push, possible risks arising from asset bubbles is another obstacle to an expansionary money policy in the coming time. Falling budget collection (that in Q2 was only 78% of Q1, and in Q3 only 85% of Q2) has also restricted aid packages for businesses and the people.

In general, Vietnam’s economic health has significantly declined. The minus growth rate of 6.71% in Q3 may not totally mirror the disruption in goods production and circulation, as well as the halt of trading activities on a large scale plus the uncertainty of the life of millions of workers. The resilience of both the corporate sector and the people in pandemic-ravaged areas is approaching the limit.

The aftermath shows that Vietnam should not stay faithful to draconian pandemic control methods. Economic operations should be set free so that a normal life can begin.

The shifting of orders placed in Vietnam to other countries carried out by several foreign-invested enterprises or the exodus of migrant workers from production hubs may be short-lived. However, if the philosophy with which Vietnam has used to fight the pandemic is not changed to ensure the continuity of goods production and distribution by utilizing more appropriate and effective methods, all the above vexing issues are destined to come back. Businesses won’t expand their investments and workers won’t return to cities as long as they don’t feel assured with future pandemic control measures.

The prospect of economic recovery is therefore dependent largely on the strategy for combating the pandemic in the coming time. However, at the moment of speaking, Vietnam is still lacking a comprehensive masterplan for all localities and ministries which is safe, flexible and, particularly, economical and feasible to businesses. The pandemic has ebbed and the vaccination rates have been rather high in economic hubs. Yet many enterprises are unable to restart production. Passenger and goods transport remains discontinued to a certain extent.

Aside from an effective change of pandemic control measures, social welfare and fiscal aid packages should play a more important role in economic recovery. To date, these packages have been limited. In the current context, Vietnam should opt for a budget deficit rate higher than the normal level to pacify the people and support businesses in their production resumption. However, when the pandemic is over, fiscal discipline must be strictly complied with to avert fiscal and public debt problems in the long run. Notably, no matter how big they can be, the Government’s aid packages are limited and far from meeting the demand of the economy. There is no way other than letting the economy rescue itself by reopening production and consumption activities.

The sharp increase in gas prices recently will surely affect the speed of economic recovery and increase prices of goods.