In Vietnam, fintechs thrive during Covid-19

More people are avoiding the use of bank notes during the COVID-19 pandemic.

On March 7, one day after the 17th COVID-19 patient was discovered in Hanoi, supermarkets were full of buyers. 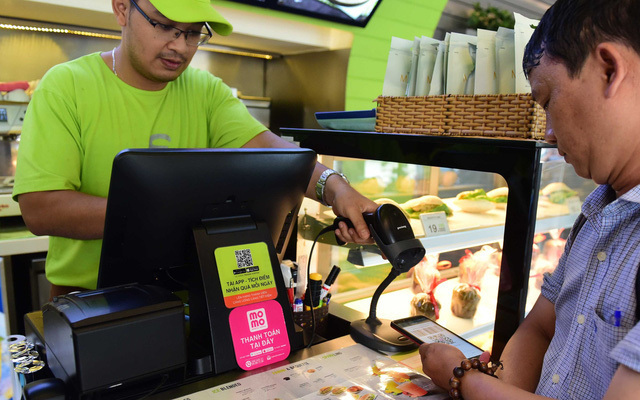 “You’d better not to touch bank notes these days,” she said. The woman was seen wearing a face mask and gloves.

The Chinese central bank has destroyed a large amount of bank notes collected from epidemic-hit areas. The country also conducts ultraviolet disinfection on banknotes. They are isolated for 14 days before being brought into circulation.

In Vietnam, the State Bank of Vietnam (SBV) has requested its local branches and commercial banks to disinfect bank notes and isolate the notes for a certain time before putting them back into the market.

Vietnamese now have many choices for non-cash payment methods, including cards, and other payment apps such as Samsung Pay, VNPay, ZaloPay, ViettelPay and MoMo through smartphones and watches. The apps are contactless as they don’t require signature on invoices.

“The transaction value with MoMo e-wallet has increased sharply after Tet. This is partially because of the increased online purchases and online payments,” said Nguyen Ba Diep, vice president of MoMo.

He said the value of transactions has also increased by 50-100 percent because consumers are buying many things at once.

Pham Nguyen Anh Huy, a lecturer at RMIT University, said online purchases at AeonMall and CoopMart have increased by 3-10 times.

“The epidemic has caused fears, but it has also brought opportunities to create a new payment habit in Vietnam,” he said.

Developing non-cash payments is one of the issues mentioned by Prime Minister Nguyen Xuan Phuc in the Instruction No 11 on the tasks and urgent solutions to ease difficulties for enterprises and help them cope with Covid-19.

Under the plan on developing non-cash payments approved by the government, by the end of 2020, the proportion of cash of total payments should not be higher than 10 percent, while 50 percent of individuals and families in large cities should use non-cash payments when shopping.

However, an analyst warned that the habit of using cash for payment won’t change overnight, despite the high risks in Covid-19.

A cashier at Home Farm Shop in Ha Dong district in Hanoi confirmed that most people still make payments in cash.

“As of 7pm today, there were two payments via VNPay and three via cards, while the remaining payments were in cash,” she said.

In 2019 venture capital funding pouring into Vietnamese fintech companies accounted for 36 percent of total fintech investment in the region with HCM City and Hanoi emerging as regional as fintech hubs.