Foreign banks have so far gained positive business performance in the Vietnamese market and their results are estimated to be better than Vietnamese banks with the same scale in capital and total assets.

Many foreign banks in Vietnam have been pumping more capital to expand their footprint and increase share in the domestic market, especially in the retail banking sector. 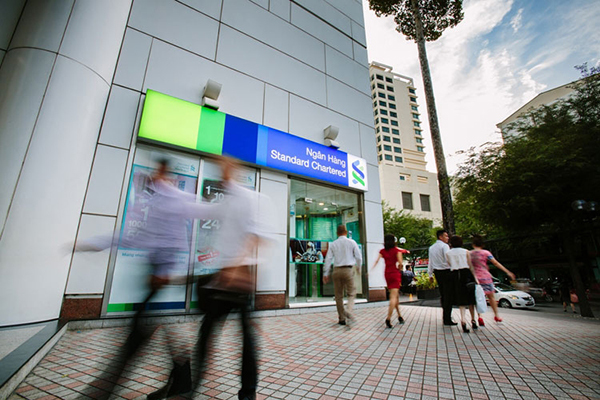 Standard Chartered Vietnam has successfully raised capital to US$180.9 million

Standard Chartered Vietnam in February completed its plan to raise charter capital from VND3.08 trillion (US$132.19 million) to VND4.215 trillion (US$180.9 million).

NongHuyp Bank - Hanoi branch and Bank of China - Ho Chi Minh City branch have also raised capital after getting the nod from the State Bank of Vietnam (SBV) last year. The former has been allowed to increase capital from US$35 million to US$80 million while the latter from US$80 million to US$100 million.

After the capital hike, Bank of China - Ho Chi Minh City branch is continuing to complete another increase, lifting it capital to US$180 million after getting the approval from the SBV late last month.

Foreign banks have tended to expand their operation in Vietnam by raising capital and opening more branches across the country in the past two years.

Reports from the Vietnamese central bank showed that the assets of joint venture banks and wholly foreign-owned banks in Vietnam surged sharply by 18.34 per cent to VND1.1 quadrillion (US$47.21 million) in 2018.

The move shows that foreign banks have big ambitions in the Vietnamese market and want to compete with Vietnamese banks in the retail banking sector, which has high growth potentials.

“Only 30 percent of the population has access to banking services and even a smaller number of these people use credit cards or other types of mobile services; there is a huge potential in this unbanked population,” Seck said.

Foreign banks have so far also gained positive business performance in the Vietnamese market and their results are estimated to be better than Vietnamese banks with the same scale in capital and total assets.

The combined interest income at 189 overseas branches of South Korean banks gained 18.1 percent year-on-year to US$1.86 billion last year, of which net income increased the most in Hong Kong, China and Vietnam, the FSS said in a statement released recently.

There were nine wholly foreign-owned banks and 49 foreign bank branches operating in Vietnam by the end of 2018. Some branches have huge charter capital such as SMBC Hanoi (nearly US$302 million), Bangkok Bank in Hanoi and Ho Chi Minh City (over US$226 million).