The flexible office market in HCM City comprising co-working and serviced offices is among the fastest growing in the Asia Pacific, market researchers said.

At a meeting with the media to report on the city property market in the first half of the year, CBRE said HCM City was one of the top three flexible office markets in the Asia Pacific.

Of its total office space, flexible office accounted for 2 percent at the beginning of this year, and would increase to 5 percent by the end of this year, it said.

The development of the market is owed to the diverse range of business models in Vietnam, according to a CBRE executive.

A representative of batdongsan.com.vn, an online channel providing information about the real estate market, told Viet Nam News the market had grown strongly and would further accelerate in future.

It was no more a preserve of small companies with large foreign players having made an entry, he said, citing the example of the multinational Regus, which had opened 10 offices in the country.

“The development of co-working space is an unavoidable trend since office space supply in big cities like Hanoi and HCM City cannot meet demand.

Besides, co-working is suitable for Vietnamese companies, who are mostly small and medium-sized enterprises.”

The market would continue to grow in terms of quality as well as size, he said.

Companies would not only offer space in old places but also in grade A and grade B office buildings, he said.

Speaking to Viet Nam News, a Savills executive said the co-working segment in HCM City had grown at 90 percent a year for the last two years and had around 37,000sq.m to rent, mostly in the central area.

This growth was impressive compared with other markets in the region like Singapore and Hong Kong, he said.

The market now has many famous foreign brand names like WeWork, Up, Dreamplex, Regus, Compass and Kloud.

The market would continue to develop strongly thanks to demand from local and foreign companies who want to cut cost or are in the first stages of studying the market, he said.

The status of the market can be clearly seen from the performance of the companies in the industry.

A start-up offering co-working space, Toong is now a successful company which has been growing and growing.

Duong Do, CEO and founder of Toong, also said: “All offices the company has in Vietnam achieved high occupation rates of 85-100 percent six weeks after opening.”

“Our clients are from 36 sectors. They are individual clients and companies with up to 200 workers, both newly-established and long-standing.”

The short supply of traditional office space is also cited as a major reason for the industry’s growth.

CBRE said the HCM City office market saw no new supply in the second quarter of 2019 in either grade.

Due to limited supply in the first half rents for both grades A and B continued to increase but at a moderate pace, especially grade A.- VNS 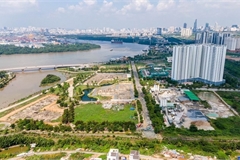