Hotel market to recover next year 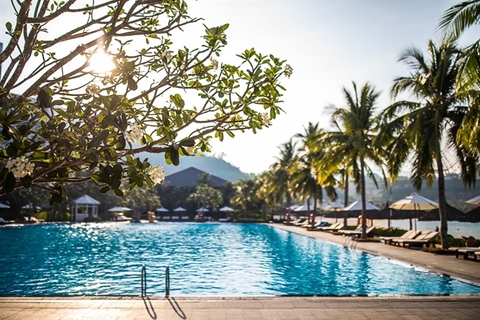 A resort in Nha Trang. The hotel market is expected to face a severe decline in room occupancy due to the pandemic and will not recover until next year. — Photo vietnam.travel

Many hotels have either suspended operations or temporarily closed to cut costs, and have retained only key personnel to prepare for reopening.

These moves were done to offset the revenue decline in the short term, but many hotel owners are still uncertain about how long it will take for tourism demand to rise again.

Savills said the global economic impact caused by the pandemic would make it more difficult for a full recovery of the hotel industry this year.

“Full recovery is likely to take place in 2021,” Savills said.

Domestic tourism demand, especially from young travellers, will play an important role in the recovery of the hotel industry, it said.

A report from CBRE Viet Nam said the hotel market in Ha Noi has shown more positive signs than in HCM City.

The four- and five-star hotel segment in Ha Noi is expected to recover more quickly when international businesses resume normal operations, with hotels in Dong Da and Ba Dinh districts preferred by customers.

Domestic guests and international visitors from Northeast Asia will also play a role in the recovery of the hotel market in Ha Noi after the outbreak is under control.

For the hotel market in Ha Noi, if the epidemic is contained by June, the average room rate this year will decrease by 8-13 per cent and the occupancy rate will drop by 46-51 per cent compared to last year, according to CBRE Viet Nam.

If the epidemic is contained in September, the average room rate will decrease by 15-20 per cent, while the room occupancy will fall by 50-55 per cent compared to last year.

For the hotel market in HCM City, CBRE Viet Nam forecasts that if the pandemic is controlled in June, the average room rate this year will fall 10-15 per cent, and the room occupancy will decrease by 40-45 per cent compared to 2019.

If the epidemic is controlled by September, the average room rate will decrease by 17-22 per cent compared to 2019, the room occupancy is also expected to drop by 44-49 per cent over the last year.

The Viet Nam National Administration of Tourism expects a slow recovery post-COVID, and has created two scenarios for the tourism sector this year.

In the first scenario, the number of international arrivals to the country is expected to decrease by 70 per cent this year compared to 2019 if the outbreak is contained in June.

In the worst-case scenario, the number of international visitors will fall by 75 per cent if the pandemic is controlled by September.

“In any scenario, this year will see an unprecedented drop in terms of tourist volume, and consequently a plunge in occupancy levels at hotels. The possibility of a global recession due to the outbreak will also negatively impact the hotel market,” the Viet Nam National Administration of Tourism said.

Mauro Gasparotti, director of Savills Hotels Asia Pacific, said: “Viet Nam hospitality has been affected and this will likely continue into the foreseeable future. However, the hospitality industry is likely to see the fastest and strongest turnout when compared to other sectors.”

“The country’s high reliance on local travellers and the Chinese and Korean markets could turn out to be an advantage as these groups are expected to be some of the first who are able to travel again,” Gasparotti said.

Viet Nam suspended flights from China at the end of January and from South Korea in early March. At the end of March, all international flights were suspended.

With travel restrictions, social distancing measures and reluctance to travel due to the COVID-19 outbreak, Viet Nam saw only 3.7 million international tourist arrivals in the first quarter, a year-on-year drop of 18.1 per cent, while the number of domestic travel trips also saw a decrease of 18 per cent year-on-year.

The Viet Nam National Administration on Tourism estimated a loss of US$5.9-7.7 billion to the country’s tourism from February to April.

Hotels, tour operators and travel agencies were severely impacted during this period. Many hotels had to reduce staff working hours and lay off staff, or temporarily close. — VNS

Unable to earn money, investors put hotels up for sale

The owners of small and 3-4-star hotels, valued at tens or hundreds of billion of dong, have suffered the most from COVID-19.