Though receiving some guests during the April holiday, hotels are still not doing well. Some have had to close and others are operating at a moderate level.

According to the Khanh Hoa provincial Tourism Department, the hotel room occupancy rate was 2.81 percent in the 4-day April holiday, while it was 82.75 percent last year. 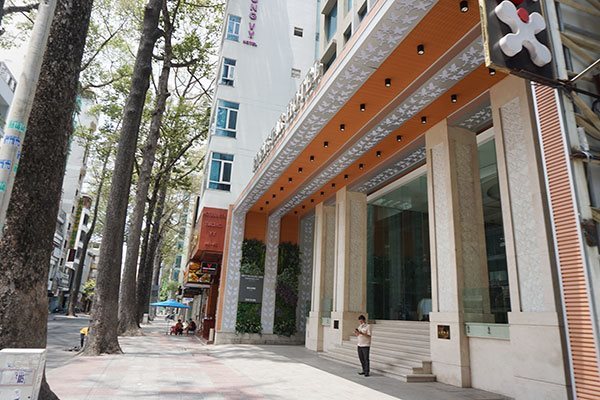 A four-star hotel in HCM City

Le Van Son, CEO of Liberty Central Nha Trang, said the hotel can maintain operation with the occupancy rate of 15-17 percent. Its guests are domestic travelers and some foreign travelers who cannot return home because of Covid-19. Though the hotel has applied measures to cut costs, problems still exist.

“The market remains very quiet and it will only see changes in 1-2 months. We are offering best discounts to lure travelers,” he said.

The hotel is offering a service package with the discount of up to 70 percent. Travelers pay VND550,000/night per person for 3-day-and-2-night services, which include one day of touring four islands, two breakfast buffets, one lunch on island and one dinner.

According to Son, who is also deputy chair of the Nha Trang – Khanh Hoa Tourism Association, only 10 percent of hotels in Nha Trang still is operational.

The situation seems to be better in Phan Thiet, with 70-80 percent of hotels and resorts having resumed their operation. However, hoteliers remain very cautious when talking about the market prospect.

“There still have not been many optimistic signs from the domestic market after the April holiday,” said Nguyen Van Khoa, CEO of Mui Ne Bay Resort in Binh Thuan.

“The international market remains stagnant. Some partners still hold contracts, but it’s not clear when they will send guests again,” he said.

The market is also frozen in HCM City. Hoteliers would feel happy with just 10 percent of occupancy rate. A lot of accommodation facilities still cannot reopen after a long time of closure.

According to CBRE Vietnam, the hotel room occupancy rate in HCM City was 42 percent in Q1, while the revenue per room dropped by 47.9 percent compared with the same period last year.

Time to hunt for hotels

CBRE Vietnam said since the beginning of Q2, the firm has noticed an increase in desire to purchase hotels which are facing problems in cash flow. It also noted that there are no 4-5-star hotels up for sale.

This is because the owners of the hotels are large groups with plentiful capital which allowed them to overcome the Covid-19 crisis.

A 4-star hotel with 100 rooms in good position in Nha Trang City can be sold at VND200 billion or less.

“It’s now the time to buy. The price could be 20 percent lower,” a broker said.

In Vietnam, hotels are being sold as owners take losses amid Covid-19

Most hotels and resorts to reopen this month with attractive promotions