How big are Vietnamese banks?

2020 is approaching. This is considered a significant milestone for the banking system. For many banks, this is the last year for the period of restructuring bad debt which kicked off five years ago. 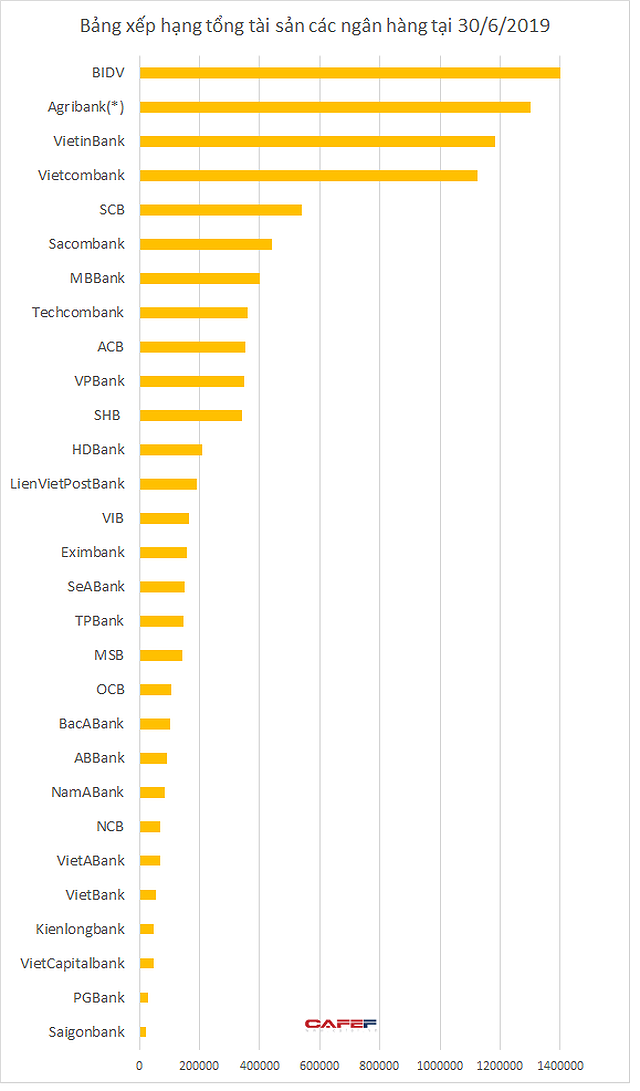 The total assets of some banks

2020 is also the deadline for 10 banks to satisfy Basel II standards. And it is the time for banks to enter a new race for important goals, including the listing of shares on international bourses.

Regarding the scale of banks, the State Bank of Vietnam (SBV) reported that the total assets of the credit institution system had reached VND11,210 trillion, which is four times higher than 10 years ago.

Meanwhile, according to CafeF, as of June 30, 2019, the total assets of 29 commercial banks, not including three ‘zero-dong banks’, Dong A Bank, PVcombank and Bao Viet Bank, had reached VND9,600 trillion.

Of these, the total assets of four state-owned banks, or ‘the big four’ in Vietnam, namely BIDV, Agribank, VIetcombank and VietinBank, had exceeded VND1,000 trillion for each. BIDV and Agribank exceeded the threshold in 2016, VietinBank in 2017 and Vietcombank in 2018.

The four banks have assets of VND5,000 trillion in total, which has increased by four times over the last 10 years and accounts for 45 percent of total assets of the whole banking system.

In late 2009, Agribank, with VND480 trillion, was the biggest bank, leaving the second largest bank, BIDV, with VND300 trillion, far behind. However, BIDV has surpassed Agribank with VND1,300 trillion.

Besides the big four, other seven banks also have big assets of over $10 billion, or VND232 trillion) for each, namely SCB, Sacombank, MBBank, Techcombank, ACB, SHB and VP Bank.

SCB is the private bank with the largest total assets, over VND530 trillion. However, the figure is just equal to half of the members of ‘the big four’ group. Sacombank and MBBank are following SCB with the total assets of VND402 trillion and VND439 trillion. The remaining four banks have more than VND300 trillion.

HD Bank has total assets of VND210 trillion. If it can maintain current growth, the bank would join the club of banks with assets of $10billion soon.

The banking system comprises 35 commercial banks, but there is a big gap between the biggest and the smallest banks. At present, there are still nearly 15 banks which have total assets of less than VND100 trillion each. Saigon Bank has VND21 trillion and PG Bank has VND28,000, or 1/65 of that of the biggest bank.

Analysts believe that the State Bank of Vietnam (SBV) should follow the move of other central banks to cut interest rates. This would help ease the burden on businesses.