Is the north-south expressway attractive to investors?

The Ministry of Transport (MOT) has issued documents for international bidding to find investors for 5 out of 8 component projects of the North-South Expressway. 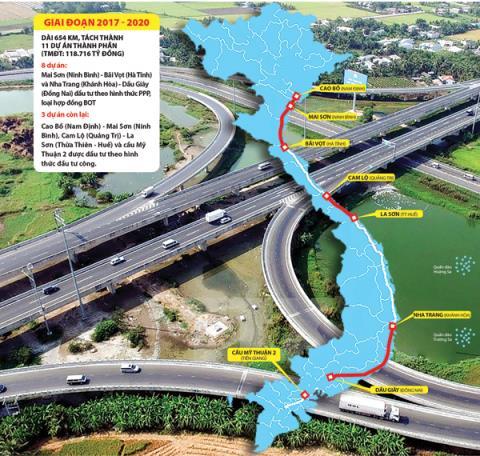 Commenting about the requirements, some experts said this will make it difficult to attract investors.

Nguyen Quang Toan from the Hanoi Transport University estimated that the total investment capital of the five component projects is up to VND52.4 trillion, or $2.2 billion, of which VND32.7 trillion will be from private investors, while the remaining will be from the state budget.

As such, investors will have to spend VND6 trillion on each project. There have been lot of projects with the same capital undertaken by private investors. Therefore, Toan cannot see any problem in capital mobilization.

MOT sets easy requirements on capital mobilization. If investors cannot sign credit contracts after six months, the bidding contract with MOT will be canceled. It would be better to shorten the deadline to three months.

The biggest problem for investors is the high risk.

A lot of BOT (build, operation, transfer) projects have reported losses. Half of the projects under the management of the Vietnam Road Administration are taking losses.

Vietnam now offers to sell toll fee collection rights to foreign investors, who requested the government to become guarantor for the turnover and exchange rate. But the government refused.

Nguyen Dinh Tham from the Hanoi Civil Engineering University commented that investors are only interested in projects if they can foresee satisfactory profits. If the government doesn’t become guarantor for exchange rate and turnover, investors will offer very high bidding prices.

Tham agrees that it is necessary to set strict requirements on investors’ financial capability and experience to avoid incapable investors. In many BOT projects, investors only had 10-15 percent of total capital needed, while the remaining capital was from bank loans.

If Vietnamese enterprises are not strong enough to undertake projects, they can join forces with others to attend the bids.

Construction work on eastern section of the North-South Expressway will start thisyear, and is scheduled to finish by 2021, according to MOT.

Tolls on eight sections being developed under the public-private partnership format for the North-South expressway project are likely to be collected for at least 24 years.