Chu Hong Minh, chair of the Vietnam Restaurant Association, said many investors want to join the market but they lack information. 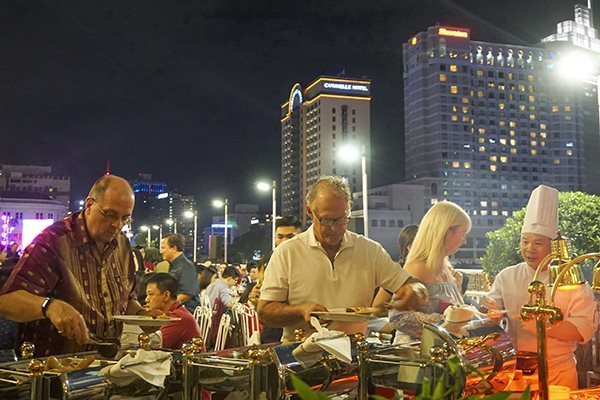 Bars and cafes account for more than 13 percent of total shops and see the strongest growth.

Many businesses from Asia, especially Singapore and Taiwan, where the culinary markets are stable, are interested in fast growing markets like Vietnam.

Singaporean businesses have promised many different cooperation models, from franchising to contributing capital to settingup companies.

The profitability rate in developing restaurants in Vietnam is low. The number of businesses joining the market and succeeding is also low. The success rate is just 20 percent.

Many investors just follow the crowd when opening restaurants, and they do not make thorough preparation or have necessary knowledge to join the market. Other investors take on too many things and don’t gather strength on the core business field, which is also a reason behind the failure.

Duong Tan Hoai, president of Ngon (delicious) Chain said there are not many opportunities for shops which ‘sell everything’.

Running eateries proves to be in high fashion at this moment. One and all want to run restaurants, bubble tea shops and cafes. But only 10 percent succeed, 20 percent make little profit, 20 percent sometimes can make profit and the remaining 50 percent have to shut down.

In many cases, restaurants have to shut down just after several months of operation. They don’t know how much capital they need, how many products they can sell and who their major customers are.

Albert Kong, managing director of Asiawide Franchise Consultants Pte suggested that businesses do the things that rivals cannot do.

Investors need to understand their strength, customers’ taste and their affordability before opening restaurants.

“I wouldn’t open a café because there are too many cafes in the market. Pho is also popular. However, I would sell pho if I have special pho that my rivals don’t have,” he said.

Foreign investors of the loss-making Vietnamese food chain Mon Hue have claimed that some US$80 million has disappeared from the firm’s bank accounts.