Japanese investment in the manufacturing and processing industries has bounced back after five years of decline.

Investors are targeting the Vietnamese host market instead of focusing on exports.

Marubeni has decided to pour another $115 million into its coffee processing mill in Ba Ria-Vung Tau, just days after it started the construction of the paper plant Kraft of Asia, capitalized at VND4.8 trillion in the same province. 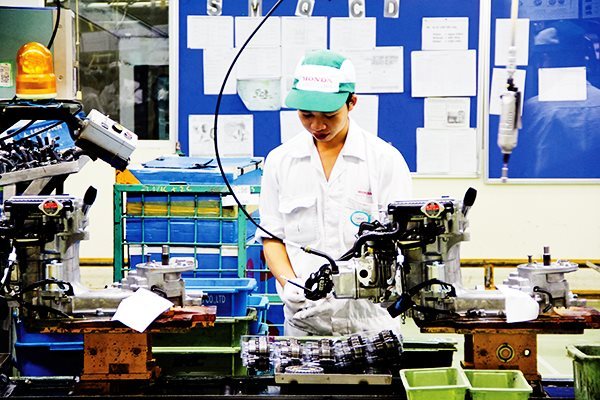 In the central region, Hoya Group has kicked off construction of its second medical equipment plant with the designed capacity of 130 million products per annum in VSIP Quang Ngai IZ, 10 years after developing the first plant in Binh Duong.

Marubeni and Hoya are two of many Japanese enterprises which have strengthened investment in the manufacturing and processing industries in Vietnam. Prior to that, in 2012-2017, Japanese investors paid more attention to projects in the service, trade and real estate sectors.

Takimoto Koji, chief representative of JETRO HCMC, confirmed this, saying that investments in manufacturing and processing industries had bounced back since 2018.

According to the Foreign Investment Agency (FIA), huge projects which were not found in the last five years have come back. As many as six projects with committed capital of $100 million each were registered in 2018.

Meanwhile, Japanese enterprises which have manufacturing plants in Vietnam are seeking to expand their production capacity by setting up factories in the cities/provinces with abundant land, rather than densely populated HCMC and Hanoi.

According to the head of JETRO HCMC, the labor cost in Vietnam has increased, but it is still very low compared with other countries.

Japanese are returning to the manufacturing industry because they can see the development of supporting industries in Vietnam, which will allow them to easily find local vendors.

A survey of JETRO showedVietnam has the highest localization ratio growth rate among 20 surveyed countries and territories, 36.3 percent, exceeding Malaysia’s (36.1 percent), for the first time.

Koji also noted that while Japanese investors in the past made products just for export, they now tend to target the Vietnamese market. Nearly 65 percent of businesses say they can see the great potential in the domestic market, while only 45 percent said they are expecting higher revenue from exports.

Nearly halfway through 2019, Vietnam has begun to see a new noticeable transition in its foreign direct investment (FDI) inflows, with Chinese investment in the Southeast Asian country reporting a sharp rise.

Nobufumi Miura, chairman of the Japan Business Association in Vietnam, claimed that cumbersome administrative procedures have hindered enterprises from increasing their investment.