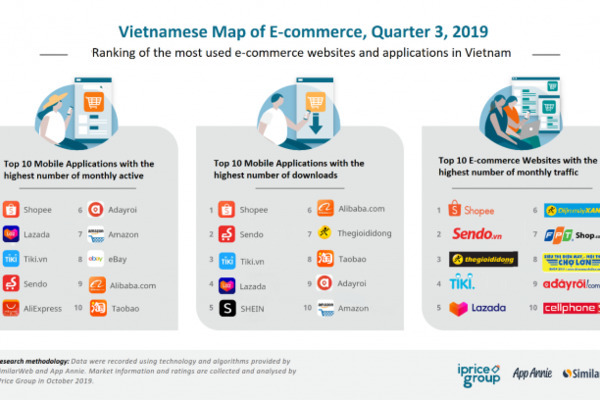 The latest update from Map of E-commerce Vietnam conducted by the iPrice Group reveals that the number of visitors to Sendo’s website in the third quarter stood at 30.9 million each month and this was the second consecutive quarter the website has seen a 10 per cent increase in traffic over the previous quarter.

Unlike its competitors, Sendo has to date been focusing on customers in all regions, not just major cities. Its solutions towards this goal are proving to be fruitful, especially in attracting new users on both the web platform and app.

After holding second place nationwide for a long time, Tiki has now ceded this position to Sendo. Its mobile app, however, went in the opposite direction: up from fourth in downloads to third, surpassing Lazada.

The iPrice Group predicted that the decline in Tiki’s website traffic (from 33.7 million per month to 27.1 million) could be a temporary fluctuation in the context of the company focusing on improving its infrastructure.

At Tiki’s annual partner meeting in September, Chairman Mr. Tran Ngoc Thai Son said that in the next three quarters the company will increase its number of warehouses to optimize both its ability to store goods and ship goods much faster.

Lazada Vietnam’s website for the first time ranked fifth nationwide, after being in the top 2 just last year. A major consolation for the company, however, is that its mobile app still ranks second in monthly active users, behind only Shopee Vietnam. These contradictory results once again show that Lazada’s total focus on mobile strategy is paying off.

The title of number one Vietnamese e-commerce platform still belongs firmly to Shopee. The company’s website saw a fifth consecutive quarter in top position, with 34.5 million visits per month. Its shopping app also topped the table in terms of both monthly downloads and monthly active users. 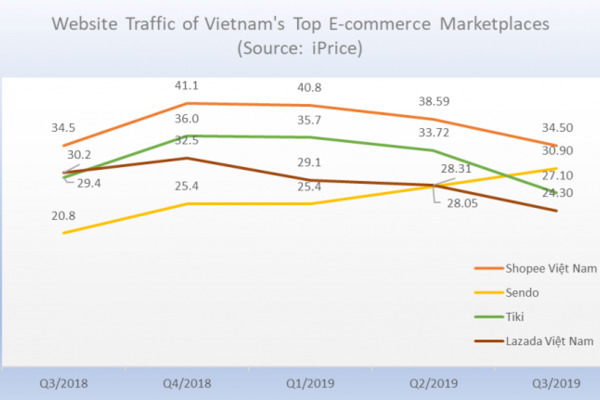 The rankings on web and mobile platforms show that in the race to attract users to Vietnamese e-commerce marketplaces, no one is the absolute winner or loser. Anything is still possible, especially when competitors are seeking to attract new sources of investment capital.

Tiki is in the process of raising capital for its D round. Speaking with the media in May, Mr. Ngo Hoang Gia Khanh, Tiki’s Director of Finance and Development, said the company’s goal is to raise $50-100 million from strategic investment funds or financial investor groups.

As for Sendo, Mr. Nguyen The Phuong, Deputy General Director of its owner, the FPT Corporation, said in June that the company has been and will be inviting outside investors to join and invest in supporting their long-term strategy and that Sendo is currently receiving a lot of attention from all parties.

Five Vietnamese e-commerce platforms were named among ten most visited sites in Southeast Asia in the first half of this year.