Many companies have been sold during the COVID-19 crisis due to lack of capital and longterm financial durability.

In late April, the market was stirred up by the news that DOJI, a gold, silver and gemstone group, had completed the takeover of The Gioi Kim Cuong (Diamond World). 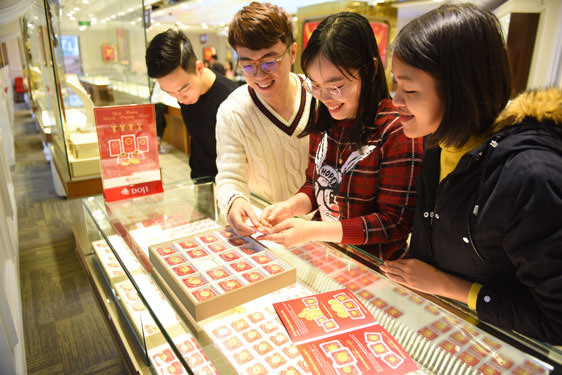 With the deal, The Gioi Kim Cuong’s 100 shops, mostly located at shopping centers and supermarkets such as Big C, Vincom and Co-op with nearly 1,000 workers, now belong to DOJI.

The value of the deal remains a secret, but analysts said the amount of money DOJI to buy one of the top 3 in the jewelry market, must be huge.

Thu Duc Housing’s Board of Management has announced it will complete the deal on transfering all 49 percent of shares, 1.813 million shares (VND48,400 per share, worth VND87.75 billion) of Thu Duc Agricultural Products Market Management JSC in June.

A representative of Thu Duc Housing said the transfer aims to help the company gather strength on its core business field.

The owner of a resort real estate project in Bau Trang, Phan Thiet City of Binh Thuan province, covering an area of 100 hectares, has to sell the project for VND480 billion because he cannot financially implement the project.

“The capital we hoped we could get from other business fields has be o e stuck because of Covid-19,” he explained. “We have to sell the project to gather strength on the production. "

A report found that in the first five months of the year, foreign investors spent $2.99 billion on capital contributions and buying into Vietnamese enterprises, equal to 39.1 percent of that of the same period last year. However, the number of deals was 11.6 percent higher, meaning that fewer deals had occurred.

Vu Tien Loc, chair of the Vietnam Chamber of Commerce and Industry (VCCI), said many Vietnamese enterprises have been hit hard by Covid-19, and have to sell their companies at low prices in many cases.

“The capital inflow into M&A is quite large, creating a strong wave, but the value of the deals may not be as expected,” Loc commented.

Su Ngoc Khuong from Savills Vietnam said many foreign investors want to buy real estate projects in Vietnam. Most of the projects Savills Vietnam is providing consultancy to, worth $500 million in total, kicked off in late 2019. As sellers need money, deals could be made very quickly.

Raymond Clement from Savills Hotels Asia Pacific said in addition to the retail sector, Covid-19 has affected the flexibility of the resort real estate market. That is the reason behind large M&A deals.

Due to the COVID-19 pandemic, businesses have seen the benefits of trading online.  Dang Hoang Hai, director of the Việt Nam E-commerce and Digital Economy Agency, talks about the issue.