Singles Day 11/11 (November 11), which opens the year-end sale season, is expected to be an opportunity for e-commerce websites to ‘win big’ before Black Friday and Cyber Monday. 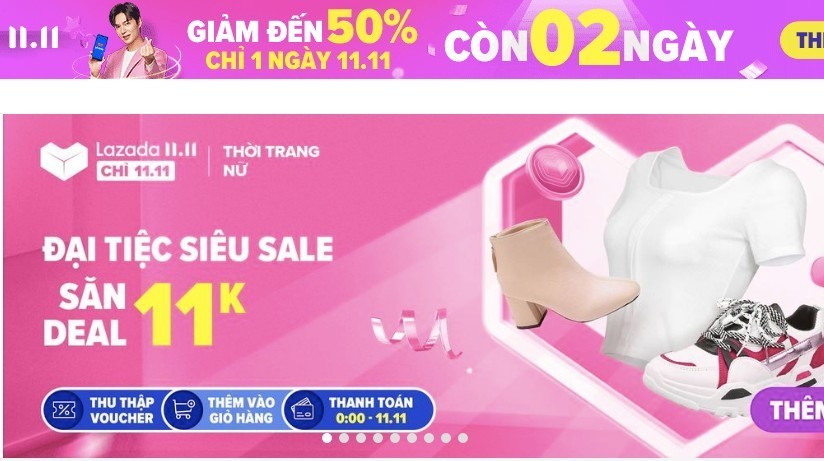 The Singles Day shopping campaign originated from China and has been spreading to Southeast Asia, including Vietnam.

Alibaba last year reported turnover of 268.4 billion yuan, or $38.3 billion from the Singles Day shopping campaign, an increase of 26 percent over 2018. They said they got more than 1 billion orders one day before the shopping campaign began.

Singles Day has been exploited recently by marketplaces in Vietnam. Tiki, Lazada and Shopee, the three biggest marketplaces, consider Singles Day the biggest shopping day of the year, running a series of sale promotion programs with the discount rates of u up to 90 percent.

According to Luu Hanh from Lazada Vietnam, Lazada made a record on the 2019 Singles Day with turnover of $38.4 billion. The event gathered 200 product brands with 1 million new products launched.

As for Shopee, the marketplace reported that 70 million products were sold on November 11.

Marketplaces also put high hopes on the Singles Day this year. In fact, the shopping campaign began in early November and geared up some days before November 11.

A representative of Lazada said nearly 3,000 leading brands have committed to offer best deals to consumers and 11 million promotions will be applied on the e-commerce site.

The total value of discount vouchers for consumers is up to VND22 billion with over 1 million vouchers launched everyday. The most valuable voucher has the value of VND1.1 billion which would be launched several times each day.

The marketplace has committed to provide free shipping service applied to bills valued at VND30,000 or more.

Contrary to the prediction that purchasing power would be weak this year because of Covid-19, which caused job losses, marketplaces believe that demand will be very high.

Phan Thu Ha from Lazada Vietnam said it is Covid-19 which has prompted more people to shop online. Reports by market analysis firms also show that Vietnamese people have spent more time on online shopping since the pandemic broke out.

Lazada reported that the number of shoppers via livestream on Lazada increased sharply in Q3, which helped the revenue of brands and sellers there increase by 420 times compared with the same period last year.

Vietnam’s B2C e-commerce revenue rose by 25 percent to 10.08 billion USD in 2019, according to the e-Commerce White Book 2020 released by the Ministry of Industry and Trade (MoIT)’s e-Commerce and Digital Economy Agency (iDEA).