After selling goods online via Facebook, Ngoc Thanh now has enough money to pay for the house she bought before on installment.

The 26-year-old owner of a footwear and clothes shop on Facebook said she is satisfied about the job. “The income is really good, though I sometimes have to work very hard,” Thanh said. 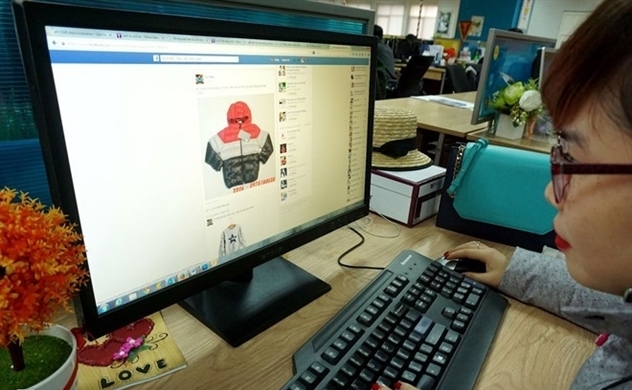 Declining to give exact figure about her real income from online sales, Thanh said the income is several times higher than the salary of VND20 million she received when working for a Japanese invested enterprise some years ago.

Thanh and other online sellers don’t have to pay for ads, retail premises or tax.

Ngoc Anh, a distributor of safe fruits and home-made dishes, said she once had a fruit shop in Dong Da district in Hanoi, but later decided to ‘go online’ because young customers now prefer buying goods via Facebook.

“In general, customers feel annoyed if you try to persuade them to buy goods. But if you show your products on Facebook with clear images and detailed information, customers won’t feel bothered,” she added.

However, the ‘golden days’ of online sellers via Facebook are coming to an end as the taxation agencies are tracking them down to collect tax. Affirming that all individuals and businesses have to pay tax for the profits they make, the HCM City Taxation Agency has requested online sellers to make tax declarations.

“If I have to pay tax, I will have to raise the selling prices to ensure profit. But I will lose many customers if I do this,” Thanh complained.

Thanh and other sellers are wavering between coming to the taxation agency to make tax declarations and staying ‘hidden’.

However, sources said the taxation agency can find online sellers easily because it can get the cooperation from banks, which allow them to trace money transfer transactions.

Nhip Cau Dau Tu newspaper quoted its sources as reporting that thousands of accounts have been found having revenue from social networks. The figure is 15,297 in HCM City.

The owner of the account did not reveal all items from business, but the taxation agency discovered that the revenue was up to VND439 billion.