According to the General Department of Customs (GDC), Vietnam exported 408,914 tons of rice in June, worth $206.705 million, a decrease of 57.13 percent in export volume and 58.03 percent in value compared with the last month. 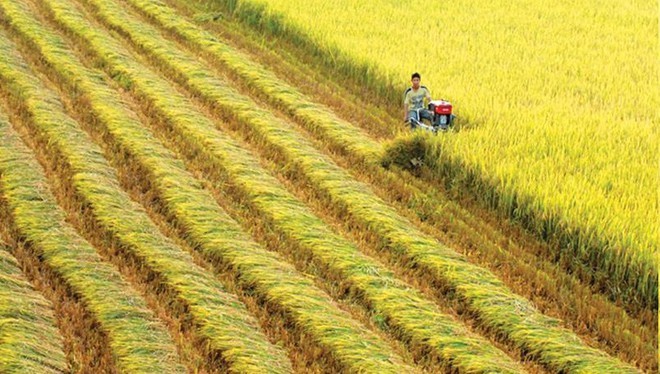 The figures represented 31.75 percent and 22.12 percent decreases in export volume and export turnover compared with the same period last year.

However, both the rice export volume and turnover in the first six months of the year were higher than the same period last year, 1.54 percent and 17.12 percent, respectively.

The sharp increase in export turnover is attributed to the export price increase, by nearly 13 percent, at $487 per ton on average.

After one month of interruption, the Prime Minister decided to resume rice export on May 1, paving the way for exports to soar this month.

In the first five months of 2020, Vietnam earned $1.5 billion from rice export, up by 12.2 percent in quantity and 26.8 percent in value in comparison with the same period last year.

Dinh Minh Tam, deputy director of the Dong Thap-based Co May Rice, is satisfied
about the export of ST24, the variety recognized as the most delicious in the world.

Tam said exports to Singapore and Hong Kong have increased by 20 percent in quantity and 15 percent in value.

“The export price of ST24 is $1,200 per ton, which is even higher than Thailand’s Hom Mali in some markets,” Tam said.

According to Pham Thai Binh, general director of Trung An Hi-technology Agriculture JSC, after the government allowed resumption of rice export, many foreign partners placed orders, pushing the rice price up.

However, opinions vary about Vietnam’s rice export prospects in the time to come. Nguyen Thanh Long, director of Gao Viet, said the export price has increased in recent months because many countries want to store food during Covid-19.

However, some countries have begun reducing imports. Clients also have many choices with low-cost rice from India, Pakistan and Myanmar. Besides, Thailand has begun its harvest, which will increase supply.

Because of unprecedented difficulties, Thailand may be outstripped by Vietnam in rice exports this year, but this may only be for the short term.

Philippine pivot does not impact on Vietnamese rice export