Based on the supervision and inspection of the State Securities Commission and the verification results of the police, the State Securities Commission imposed administrative fines of VND600 million (nearly $30,000) each on Mr. Le Manh Thuong and Ms. Pham Thi Phuong for price manipulation. They used 50 accounts to create fake supply and demand in order to manipulate the price of FTM shares of Duc Quan Investment Development Joint Stock Company (FTM).

In 2019, investors witnessed a rare scandal for a stock. The historic price drop of FTM shares became an unprecedented phenomenon with trillions of VND disappearing. But very few people knew what had happened, even securities companies with extensive experience.

FTM recorded 30 consecutive falling sessions, from nearly VND24,000 to about VND3,000 per share. At that time, 11 securities companies and one bank granted margin for FTM shares and suffered a loss of nearly VND200 billion.

In the history of trading on the Vietnamese stock market, there have been many stocks consecutively falling to the floor for a few dozen sessions like FTM. Many retail shareholders who buy at the time of the stock price increase suffer heavy losses.

But in the case of FTM, it was different, as the key shareholders held almost all of the shares of the business. Eleven shareholders with a ratio of 4% or more held nearly 97% of the FTM shares in circulation and listed on the stock market. These were all founding shareholders and long-term shareholders.

Who was the loser when FTM lost its liquidity and dropped a total of 90%?

The answer can be seen when looking at the shareholder structure. Key shareholders holding up to 97% are considered losers when the stock fell about 10 times. However, in order to accurately answer whether these shareholders suffered losses and how much, it is necessary to know the real value of the shares and the capital contributed by the shareholders.

Another group of subjects who also suffered was the securities companies that fell into a dilemma, when they could not sell FTM shares and would have incurred more losses if they kept holding the shares. The margin loan (deposited by FTM shares) cannot be recovered and the value of collateral assets of FTM shares continuously shrinks. According to information at that time, the margin debt totaled hundreds of billions of VND, from about 10 securities companies and banks.

Recently, the State Securities Commission fined other individuals such as Ms. Le Thi Mai Hoa (Hanoi) with VND60 million (nearly $3,000) for not disclosing information that she owns 5% of shares in the APG Securities JSC; Mr. Le Van Thanh (Hanoi) was fined VND60 million for the same reason; and Louis Capital Joint Stock Company (TGG) was fined VND60 for not disclosing information on time as prescribed by law. 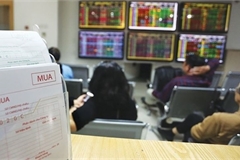 Vietnam’s stock market mobilised total capital of VND292.1 trillion (US$12.8 billion) in the first nine months of this year, up 12 per cent compared to the previous year.