The stock market continued to decline with another $12 billion lost, following the loss of $23 billion one month before. 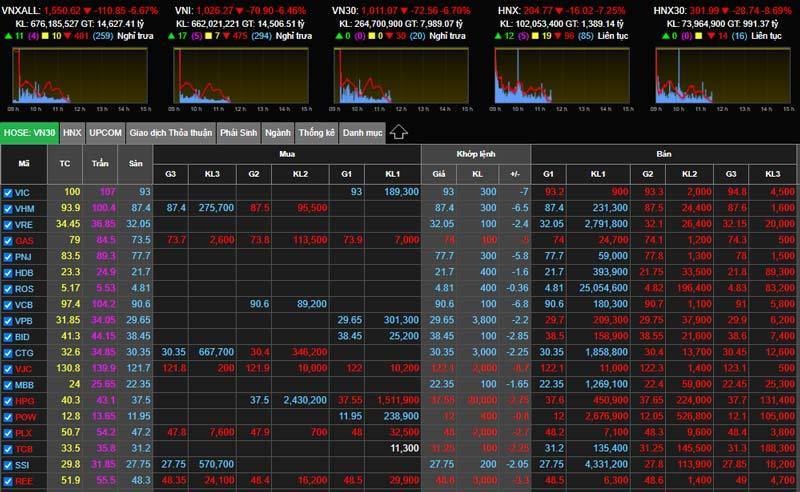 Another turbulent trading session occurred on January 28. This appeared to be the sharpest fall in history with the VN Index losing 70 points, or 6.5 percent. $12 billion was lost within one morning.

On January 19, the stock market witnessed the VN Index decreasing by 75 points in the morning session, which was higher than the decreases in any other trading session in the 20-year history of the market.

As such, the VN Index has lost 15 percent since January 7, when it nearly hit the 1,200 point threshold. The other indexes have seen similar decreases and the capitalization value of the entire market has decreased by $35 billion.

Prior to that, investors hoped that the market would exceed the record high of 1,204 points seen some years ago and would reach a 1,300 point threshold in the first half of 2021.

Analysts said the stock prices dropped sharply on January 28 morning because of bad news, including information about a number of newly infected Covid-19 cases in the community in Hai Duong and Quang Ninh, the decline of US stocks and the high pressure on call margin.

However, the demand for bottom fishing has been high in recent sessions. Roughly VND16.5 trillion worth of shares were traded on the three bourses on the morning of January 28.

The downward trend after a succession of days of increases was foreseeable. However, the sharp decreases are a surprise. Many new investors (F0) are surprised about the sharp falls and panicked, trying to sell shares by any means.

The representative of a HCM City-based securities company confirmed that new investors followed the crowd in buying stocks and they tried to sell stock en masse amid the market happenings. A lot of investors incurred a loss of tens of percent within a short time.

Prior to that, some analysts predicted that the market would see a decline in Q1 before increasing again in Q2, when listed companies will announce their business plans for 2021.

The Vietnamese stock market is expected to increase further in 2021 thanks to the positive factors of the economy. The GDP is predicted to grow by 6-6.8 percent this year.