The divestment of three state-owned tourist companies is expected to present a vast opportunity for foreign investors.

Prime Minister Nguyen Xuan Phuc recently approved a list of 93 state-owned enterprises to undergo equitisation until 2020, with the maximum proportion of 65 per cent kept by the state. Among those were three leading travel businesses who own a range of luxury hotels, namely Saigontourist, Ben Thanh Group, and Hanoitourist.

Foreign investors and consultants are eagerly awaiting the chance to invest in these businesses when their initial public offerings (IPOs) are launched in the near future.

Kenneth M. Atkinson, founder and senior board adviser of consultancy service provider Grant Thornton Vietnam, told VIR that the three have exciting potential as a result of their impending equitisation.

Several large investment banks, according to Atkinson, have been eyeing Saigontourist for years because of the potential foreign investor interest, and the same would also be true of Hanoitourist. “The opportunities come from the prime property portfolio, particularly in the case of Saigontourist and its iconic hotels such as the Continental, Rex, and Majestic, and more modern properties like the Caravelle JV,” said Atkinson. “There is significant value in the real estate itself and the ability to improve performance by considering foreign management companies who will add brand value. Saigontourist also boasts of being one of the leading travel companies and is assumed to be quite profitable.”

However, Atkinson also stressed that the opportunity will depend on the size of the float, such as the percentage of total equity for sale, how much will be retained by the government, and what the international ownership limits are likely to be.

“Challenges will exist in the readiness of the shareholders to change both management styles and operating procedures, not to mention the valuation itself. They may also be unwilling to brand the properties by bringing in foreign management. Another complication lies in the structure of the employees, many of whom have been with the groups for years and will be difficult to retrain,” he said.

“For many different reasons, I am sure these groups will have no problem attracting foreign investors, particularly Saigontourist and Hanoitourist, due to their better name recognition and real estate portfolios. Of course, pricing will pay a part in how attractive the equitisation is,” Atkinson said.

Adam Bury, senior vice president of Investment Sales Asia from JLL Hotels & Hospitality Group, told VIR that overseas investors will appreciate the chance to get a foothold in the Vietnamese hospitality industry, something which has historically proved quite challenging.

“Buying direct assets has been difficult in Vietnam given the relative illiquidity of the market, especially for city centre assets. Through public offerings, foreign investors would now be able to gain exposure to this high growth sector,” said Bury. He added that the properties are situated in areas of prime real estate, valuable locations at the heart of Hanoi and Ho Chi Minh City. In addition, a number of the assets are heritage buildings, whose remarkable histories increase the prospect of value creation.

Visitor arrivals to Vietnam have grown strongly in recent years and this is a trend that is set to continue in the medium- to-long-term. Therefore there are no fears about a lack of demand.

“On the supply side, particularly in Ho Chi Minh City where the availability of development sites is limited, these assets will see limited competition. The overall macro fundamentals for the companies do therefore seem to be strong,” Bury said.

The biggest challenge for the companies to move forward will be the reinvestment required into the owned assets. Hotels, unlike other real estate classes, require dividends to not only be distributed to owners, but for a notable portion to be reinvested into the hotel.

“This should occur annually through small upgrading, and through a major refurbishment every 8-10 years. Without keeping the property in line with new market entrants, and regional and global standards, revenues and thus investment returns will decrease over time,” Bury added.

Saigontourist holds stakes in seven five-star hotels in Ho Chi Minh City, including Rex Hotel, Majestic, Grand Saigon, Caravelle, New World, Sheraton Saigon, and Pullman Saigon Centre, and the five-star Majestic Hotel in the northern province of Quang Ninh. It has also poured funds into a series of four-star hotels across the country. 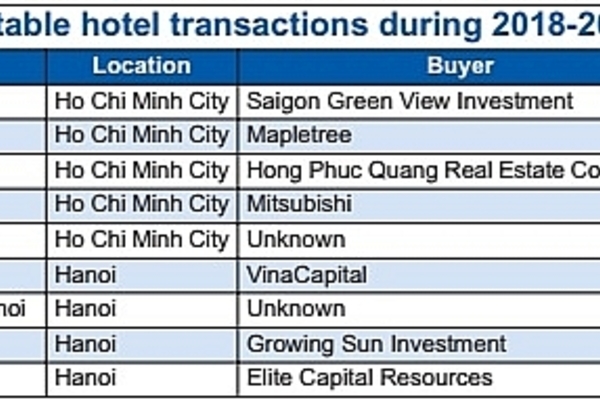 Despite having positive, track records these three tourist companies are rather slow in staging their IPOs, mainly due to difficulties in implementation. The biggest issue according to experts is that it is very hard to determine the value of the enterprises, especially where these companies have many affiliates and subsidiaries. In addition, the choice of the strategic partnership would also take time and the asset evaluation process must be transparent. For example, in March, Saigontourist set up a management board for equitisation, while all of the other steps are already in process. According to general director Nguyen Binh Minh, to implement the plan of Ho Chi Minh City People’s Committee to re-structure its operations, the company had sent a plan to the city’s Board for Equitisation and then submitted to city authorities for approval.

“We are finishing criteria, policies, and regulations on human resources and business solutions to prepare for the incoming IPO of the company. We will focus on training workers on the company’s plan for equitisation and diverse from business according to the approved plan,” Minh said.

According to data from global real estate services firm Jones Lang LaSalle, Ho Chi Minh City and Hanoi are the main markets in Vietnam for mergers and acquisitions in the hospitality industry. Over the last 10 years a series of hotel M&As took place in Ho Chi Minh City, mostly in the downtown area and near Tan Son Nhat International Airport. In 2016 Singapore-based property developer Mapletree Investments Pte., Ltd. bought out the InterContinental Asiana Saigon Hotel along with the Kumho Asiana Plaza, a landmark building in the downtown area, from South Korea’s Asiana Airlines and Kumho Industrial Co., Ltd. for $215 million.

Currently 10 out of 19 five-star hotels in the best locations in Ho Chi Minh City have international owners. They include the Sheraton, Caravelle, InterContinental, Asiana Saigon, and Sofitel.

Many of these foreign investors came to the country in the last two decades, and began by partnering with local firms. Among those are Singapore-based Glynhill Investment Vietnam, Lam Ho Investments, UOL Group, Hong Kong investors Keck Seng Investments, South Korea’s Lotte Hotels & Resorts, and Berjaya Corporation Berhad from Malaysia.

Danang and Phan Thiet, the two resort cities on the central coast, each accounted for 7 per cent of overseas investment. Meanwhile, Phu Quoc Island and Dalat made up less than 6 per cent between them. VIR

Bamboo Airways, a subsidiary of real estate developer FLC Group, is planning to issue an initial public offering (IPO) in 2020 to serve its expansion plans.

Travel firms to be fined if travelers flee

The new regulation that travel firms will be fined if illegal travelers flee has caused confusion.