Vietnam has many seaports but lacks roads connecting ports

The infrastructure system which connects seaports and key economic zones in coastal areas is still poor.

Vietnam has 45 seaports, several inland container depots (ICDs) and some large logistics centers, where 90 percent of import and exports pass through every year. 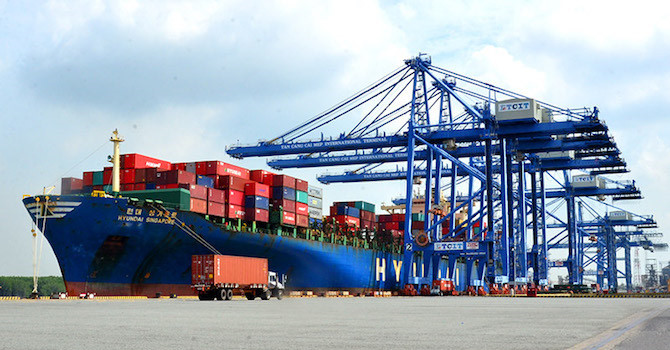 According to Nguyen Duc Kien, deputy chair of the National Assembly’s Economics Committee, in the first years of economic integration, the seaport system was seen as a major driving force for development. However, the development has been below expectations.

“We have 45 seaports, but there are only a few ports in the true sense of the word. We have more harbors than ports,” Kien commented.

Of the ports, Hai Phong, Da Nang and HCM City are the three key port clusters that are top priority when calling for foreign investment. In addition to the three ports, Vietnam also used ODA capital to develop Cai Lan Port in Quang Ninh province.

These are called the ‘backbone seaports’ of Vietnam, located in key economic zones. Big loans have been poured into the ports since 2000.

Nevertheless, infrastructure items that connect with the ports are still needed. Businesses put high hopes on the modern Thi Vai – Cai Mep port, but there is no railway.

Vietnam has built Lach Huyen port with Japanese capital and Japanese consultancy. However, there is no railway connecting the port.

Tran Dinh Thien, a member of the Prime Ministerial Advisory Council, said Vietnam has geographical advantages to develop a sea-borne economy, but it still cannot fully exploit the advantages, including key economic zones along the coastline.

Ports in HCMC and Ba Ria – Vung Tau are busy. The port development in the central region is worse because of the less developed local industries. The demand in the southern region is high as the Mekong Delta is a big rice granary.

Most of the ports in Vietnam are cargo ports. As Vietnam’s industry is still rudimentary, the economic benefits remain small. Besides the special function every economic zone has, it is necessary to fully exploit the functions of cargo ports and tourist ports with the advantages of each key economic region.

Thien pointed out that each economic zone has its own characteristics, so Vietnam needs to draw up development strategies based on special characteristics.

Vietnam’s logistics costs now account for nearly 20.9 percent of GDP, double that of developed economies and higher than the global average of 14 percent, according to the Vietnam Logistics Business Association.

The Ministry of Transport (MoT) is set to propose to the Government a draft plan on fee increases at BOT (Build – Operate – Transfer) toll booths in response to declining revenue.

The Ministry of Transport is seeking opinions from ministries, agencies and localities nationwide for the fee increase of 12-18% for 37 build, operate and transfer (BOT) operated toll road or bridge projects.