Vietnam’s export of timber and wood products is expected to reach US$11 billion this year, said Minister of Agriculture and Rural Development Nguyen Xuan Cuong. 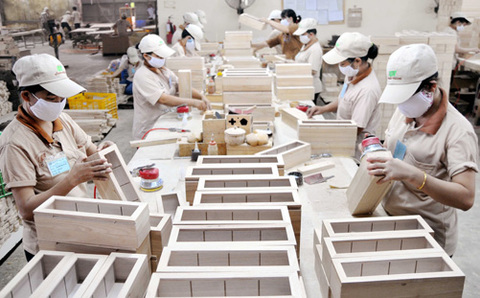 A production line of wood products at Duc Thanh Wood Processing Joint Stock Company in HCM City. The forestry sector is expected to reach US$11 billion in export value this year.

Cuong said export value reached $5.23 billion in the first half of this year, up 20 per cent compared with the same period in 2018.

“The increase of exports of timber and wood products have contributed to creating jobs and reduced the pressure of the growth for husbandry and planting areas,” Cuong said.

Speaking at a conference in Ha Noi last week, he said 2019 had proved challenging because of the US-China trade tensions and changes in the world economy, which had had an impact on agriculture, something he said the ministry saw coming.

“From a country which had maintained only 20 per cent of the forest coverage in the past, Viet Nam now has recovered nearly 43 per cent,” he said.

The minister also pointed out that in addition to the advantage of around 4,500 wood processing enterprises, Viet Nam had a lot of potential for cultivating herbs and other materials for medicine, which is a multi-billion dollar industry.

“The forestry sector needs to determine key areas for its sustainable development in the future.”

According to the Institute of Medicinal Materials, Viet Nam has 5,117 herbal plants and fungus, along with 408 species of animals and minerals used as materials for nearly 1,300 traditional remedies. Domestic demand for herbal medicinal materials is about 60,000-80,000 tonnes per year, mostly for producing foods, medicines and cosmetics.

Cuong said with a series of free trade agreements approved, the legal issue of raw materials and timber sources was inevitable in the integration trend of the forestry sector.

Plus as the summer comes, people must be aware of the dangers of forest fires.

“The weather has been hot and sunny over the past month, meaning a high risk of forest fires in the central region. The sector needs to focus on forest fire prevention and control in the last months of the year,” Cuong said.

He said the sector must build an appropriate policy framework for sustainable forest fire prevention and develop forest protection projects for each region.

According to the General Department of Forestry, the growth rate of forestry production value in the second quarter of this year increased by 4.53 per cent, 0.08 per cent higher than the same period in 2018.

In the first half of the year, the country discovered 5,691 cases of violation to the provisions of the Forestry Law, reducing 16 per cent year-on-year. The broken forest area was ​​287 ha, down 11 per cent.

At the meeting, Deputy Minister of Agriculture and Rural Development Ha Cong Tuan required the department to complete the draft decree on a timber legality assurance system to implement the Voluntary Partnership Agreement on Forest Law Enforcement, Governance, and Trade (VPA/FLEGT) between EU and Viet Nam, which officially came into effect on June 1 this year.

“This is a decree for a new issue, so it must be built with high quality and responsibility but not increase administrative procedures,” Tuan said.

With the high demand in implementing the VPA/FLEGT Agreement as well as the impact of the US-China trade war on the industry, Tuan asked the department to assign specific people to be responsible for the agreement’s implementation.

Deputy Head of the General Department of Forestry Pham Van Dien said the department would pay much attention to applying high-tech for the forest management and protection.

“To reach the target of $11 billion in export value this year, the department will co-ordinate with relevant sectors to fight against trade frauds of some export enterprises as well as control the import of timber from other countries which are in high risks of illegal timber sources,” Dien said. — VNS

The Ministry of Agriculture and Rural Development held a conference on May 24 to deploy a freshly approved project on sustainable forest recovery and development in the Central Highlands for 2016-2030.