The latest report of the Institute of Chartered Accountants in England and Wales (ICAEW) about the Southeast Asian economy said Vietnam’s GDP growth rate would decrease to 6.7 percent in 2019. However, the figure is higher than the rest of the region. Vietnam will still be the fastest growing economy in Southeast Asia. 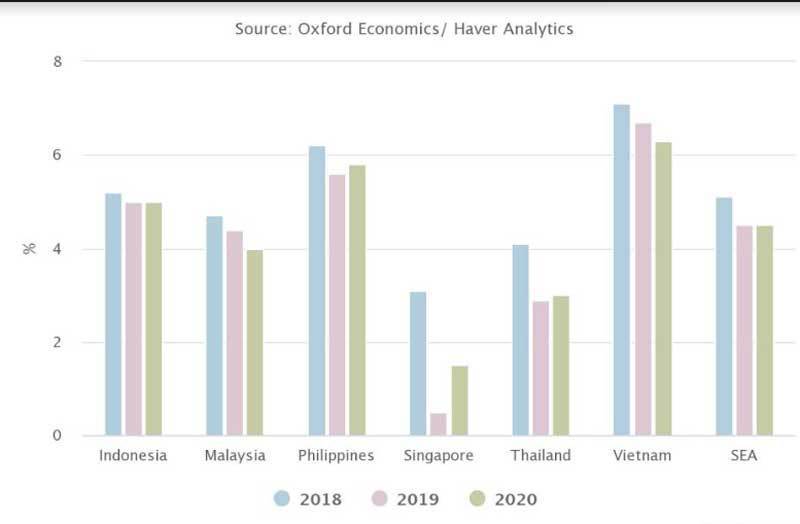 The GDP growth rates of some Southeast Asian countries

Vietnam will benefit from positive trade redirection, as well as strong domestic demand and stable FDI. Exports are an advantage for economic growth, allowing Vietnam to outperform other economies in the region.

In Q2, the GDP grew by 6.7 percent, a bit lower than the 6.8 percent growth rate in Q1, but this was an encouraging growth rate supported by stable exports and industrial production in export-oriented processing and manufacturing industries.

According to ADB, Vietnam can maintain the high economic growth rate thanks to the high domestic demand which offsets a decrease in export growth decline. The trend is expected to continue in the time to come and therefore, Vietnam’s GDP is predicted to grow 6.7 percent in 2020.

Many manufacturing enterprises may consider Vietnam as an alternative production base, creating a new impetus for FDI inflows. Besides, the EVFTA and CPTTP promise to continue to open markets for trade and investment. Therefore, FDI inflows will be strong in the coming time. $13.1 billion worth of FDI was committed in the first 8 months of 2019.

However, ADB has warned of the high risks for Vietnam’s economy in the context of the US-China trade tensions and global recession.

ADB said the inflation pressure in short term may come from adjustments of the prices of some essential goods and services put under the state’s control, and from the strong domestic demand and minimum wage increases. Besides, the food price is likely to increase because of African swine fever and serious drought.

The income from exports will increase more slowly than initially predicted, while the imports will slow down and overseas remittance may be affected because of the global recession, which would lower the current account surplus

The predicted current account surplus has been lowered to 2 percent of GDP this year and to 1.8 percent in 2020.

Minister and Chairman of the Government Office Mai Tien Dung on October 2 affirmed that Vietnam has achieved the highest gross domestic product growth in the past nine years.

Economists are upgrading their growth projections for Vietnam after the latest data showed the economy surged more than 7 percent in the third quarter, according to Bloomberg.