As global laptop manufacturers are shifting production out of China, Southeast Asian countries like Vietnam are repositioning to benefit, although some hurdles will have to be addressed for Vietnam to become a new laptop manufacturing hub.

Hon Hai Precision Industry Co., Ltd., a unit of Foxconn, the world’s biggest contract electronic manufacturer, was granted an investment certificates last week to develop a $270 million factory to produce laptops and tablets. Located in the northern province of Bac Ninh, the factory will be developed by Fukang Technology with an annual output of eight million units.

Zhuo Xianhong, general director of Foxconn in Vietnam, said last month that the manufacturer has invested $1.5 billion in Vietnam, including $900 million in the northern province of Bac Giang alone, creating jobs for over 35,000 local workers. It aims to pour an additional $700 million and create 10,000 jobs in the country this year.

It is not clear what brands of laptops and tablets Foxconn will produce in Bac Ninh, however, the group is moving some iPad and MacBook assembly to Vietnam from China at the request of Apple, a person with knowledge of the plan told Reuters in November, as the company diversifies production to minimise the impact of China-US trade tensions.

In mid-January, a working group led by Xianhong visited the north-central province of Thanh Hoa to explore investment opportunities in the locality. At the reception meeting held by the provincial authorities, the representative of Foxconn Vietnam said that it is looking into a $1.3 billion investment in Thanh Hoa to produce electronics devices with export revenue of $10 billion per year.

The project will specialise in manufacturing and assembling various electronic computer devices and computer peripherals such as laptops, desktops, and computer monitors, among others. It is reported that Wistron will produce notebook PCs on behalf of US brands in Vietnam. With the total investment capital of $273.9 million, the initiative will produce 120 million units per year.

Microsoft, which began its foray into PC hardware in 2012, is scheduled to start producing its Surface line, including notebook and desktop computers, in northern Vietnam this year, as reported by Nikkei Asian Review.

According to Taiwan-headquartered Market Intelligence & Consulting Institute, global laptop and desktop computer supply chains are expected to shift significantly away from China over the next 10 years, with most key component makers moving into Southeast Asia. It is predicted that half of the world’s laptops would be assembled in the region by 2030, with Vietnam and Thailand pegged as the main manufacturing hubs.

The institute found that Vietnam currently makes up for about 0.5-1 per cent of the global laptop market. However, the figure is set to increase as the escalating US-China trade dispute prompts more manufacturing giants to diversify production.

June Le, marketing manager of ASUS Notebook, told VIR that ASUS sees promising potential in the Vietnamese market and would like to search for strong opportunities to increase investment and general business. Indeed, the Vietnamese market is one of the prioritised countries to have cargo of new products so that Vietnamese customers are those who can first enjoy new technology trends and innovations.

According to experts, the movement of laptop manufacturing from China to Vietnam is part of a bigger movement of factories that produce many types of high-tech products to this country from its northern neighbours, driven by a surge in Chinese wages over the last 10 years and by the US-China trade war.

COVID-19 has also accelerated the phenomenon because it shows many firms that they are overdependent on China as a production base. Many corporations in the US and Europe thought that they had a global supply chain, but COVID-19 exposed to executives of those corporations that they actually had a Chinese supply chain.

“For that reason, there’s a growing consensus that about 20 per cent of the factories in China will leave the country over the next 5-10 years, according to on-the-ground foreign investment consultants we’ve spoken to, who helped multinational corporations set up factories in China 20 years ago,” said Michael Kokalari, chief economist at VinaCapital.

“They are now helping some of those same corporations find alternative countries to relocate some of their factories in order to geographically diversify their production,” he said.

According to Kokalari, it is not surprising that laptops will be one of the first high-tech products that manufacturers aggressively relocate from China to other countries, because they have become a commodity product with relatively low profit margins compared to other technology products, so manufacturers are under pressure to cut costs.

“The prediction that Vietnam will become a major laptop manufacturer is also not surprising,” he added, because according to numerous surveys from Standard Chartered and others, Vietnam is the most preferred destination for manufacturers that wish to move their factories out of China.

In addition, Vietnam is an attractive destination because factory wages are between one-half to two-thirds below those in China, and despite those lower wages, the quality of Vietnam’s workforce is comparable to China’s, according to surveys by the Japan External Trade Organization and others.

“Although 20 per cent of factories in China are likely to relocate in the next decade, the remainder will stay put, meaning China will continue to be the world’s manufacturing powerhouse and manufacturers relocating to Vietnam will enjoy a favourable geographic proximity to those Chinese supply chains,” Kokalari added.

However, the lack of an efficient infrastructure and logistics system, as well as highly-skilled labour and high-tech expertise remain key challenges. The economist said that as observed in recent years, the sudden surge in trade orders and supply chain relocations at the height of the US-China trade war had resulted in a strain on existing infrastructure, pushing business costs up.

Kokalari also pointed out the three biggest challenges for relocating laptop manufacturers. Firstly, supply chains in China are much better developed than in Vietnam, so most of the higher value-added components that current manufacturers of high-tech products in Vietnam require are imported, rather than manufactured by local Vietnamese suppliers - although there are signs that this will improve in the years to come.

“Secondly, there’s a shortage of qualified middle managers and engineers in Vietnam, which means that manufacturers that set up factories in Vietnam that make technology products need to hire expensive expatriate employees to fill these mid-level positions,” he went on.

“Thirdly, Vietnam’s physical infrastructure is sufficient for the country’s current manufacturing activity, but the government needs to improve in this area or the country will face physical bottlenecks that impede foreign-invested manufacturers within the next few years.”  VIR

Foreign groups step up plans to enter or expand in Vietnam 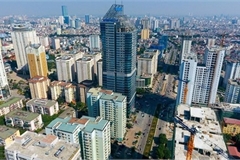