The EU on April 24 completed necessary internal formalities for EVFTA to take effect. MOIT said the agreement is expected to be ratified by the National Assembly this May. 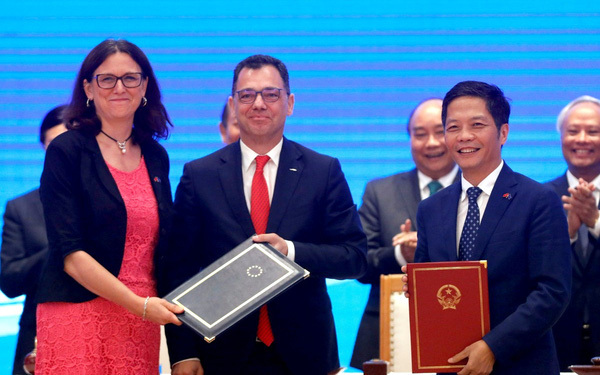 If everything goes as planned, EVFTA will take effect in July 2020.

The benefits that EVFTA can bring are very clear, though they will be associated with great challenges. With Covid-19 breaking out, inhibiting global production and business activities, both Vietnamese and European businesses are holding their breath.

“EVFTA could be seen as the key to many doors that Vietnamese enterprises want,” the director of a seafood company said.

The 2018 PCI (provincial competitiveness index) report of the Vietnam Chamber of Commerce and Industry (VCCI) showed that 88 percent of Vietnamese businesses had understanding about EVFTA, a considerable increase from the 83 percent in 2016.

There has been no report for 2020, but experts believe the figure is nearly 100 percent.

Ha Tay Chemical Weave Co Ltd, a small footwear company with 600 workers, said previously, businesses struggled in the European market as they had to compete with many rivals, including China.

However, in the last three years, European partners have become back to Vietnam and asked for cooperation. And it is not by chance. In 2017, or three years ago, was the time when Vietnam and the EU completed the check of legal and technical issues for EVFTA, and the EU proposed to split EVFTA into two separated agreements – EVFTA and IPA.

The director of Ha Tay said the UK’s exit from the EU last January still has not affected the opportunity to take full advantage of the EU’s preferential tariffs when exporting products to the UK, because there are still two years of transitional period.

Minister of Industry and Trade Tran Tuan Anh said he was pleasantly surprised about the deep understanding of the small enterprise.

A precision engineering enterprise said after diligently participating in many popular conferences and workshops about EVFTA, the enterprise has found a business opportunity. In August 2020, after EVFTA takes effect, it will sign with German partners contracts on technology transfer and the export of some kinds of machines and equipment.

In fact, Vietnam’s businesses not only are looking intently at preferential tariffs in EVFTA, but also paying attention to non-tariff issues. The news about CE standards for textile and garment exports to the EU discussed in recent days is an example.

Vietnam in favourable position in new int’l economic order thanks to EVFTA: expert