Vinasun, the No 1 taxi company in the taxi market, is bogged down in difficulties amid the appearance of of ride-hailing firms and the Covid-19 pandemic. 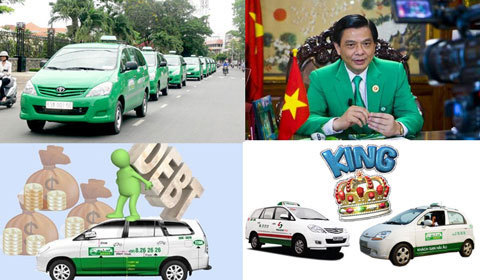 Taxi firms have to compete with ride hailing apps

Vinasun, a taxi firm of Dang Phuoc Thanh, a well known businessman, has released the Q4 2020 consolidated finance report which shows unprecedented bad results. The leading taxi firm took a loss for the fourth consecutive quarter and reported a loss for the first time in its history.

In 2020, Vinasun had revenue of over VND trillion, a decrease of 50 percent and incurred a loss of VND210 billion.

The company attributed the loss to the prolonged impact of the Covid-19 pandemic.

In previous years, Vinasun had to struggle to compete with ride hailing firms such as Uber and Grab, but it still could make a profit.

Vinasun's share price has been flat in the last year, though the stock index increased significantly. Vinasun shares were traded at around VND10,000 per share, equal to the face value and much lower than the VND30,000 per share in mid-2014.

Prior to that, a series of investment funds injected money into Vinasun as they believed that Grab and Uber could not dominate the Vietnamese market. After several years of investments, GIC and TAEL have incurred a loss of tens of percent.

At the time of the investments, Vinasun was a stock with potential. Vinasun, together with Mai Linh, was dominating the taxi market. However, the market changed rapidly when ride hailing firms appeared, offering cheaper services.

Commenting about the cutting of more than 1,000 jobs at Vinasun, analysts said this was unavoidable in the context of the 4.0 industry revolution. The same will occur in many other industries, including textiles and garments. However, when some jobs disappear, new jobs will be created.