Will phone exports bounce back as Samsung’s production in China slows?

Samsung is believed to have great advantages over its rivals as its production base is in Vietnam, not in China, where the Covid-2019 has forced a series of factories to close down.

Reports show the sharp decline in phone exports in the last two consecutive years. The General Statistics Office (GSO) reported that $2.6 billion worth of phones and phone accessories were exported in January, down by 22.4 percent compared with the same period last year. 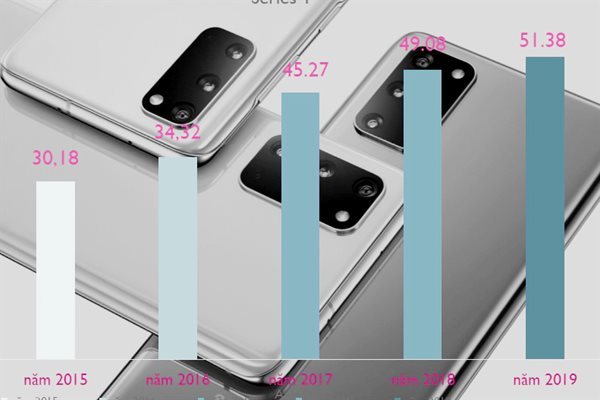 The export turnover of phones and phone accessories in 2015-2019

The General Department of Customs (GDC) reported the sharper decrease, 36.5 percent in December 2019 compared with November. The export turnover of $2.86 billion in December means a slight decrease compared with the same period of 2018,

The export growth of the products which made the greatest contributions to GDP (25 percent) has been slowing down.

2019 was the second consecutive year that saw the export turnover of phones and phone accessories growing more slowly than other key export products.

Phones and phone accessories have amounted to over 20 percent of Vietnam’s total export turnover in the last few years.

Samsung remains the biggest exporter. The world’s largest smartphone manufacturer chose Vietnam to set up its production base with two complexes in the north, which provide 50 percent of the manufacturer’s total products sold in the world.

A representative of Samsung Vietnam told the local press that the manufacturer uses electronic components from many countries, including China, but most components are from Vietnam and South Korea.