VietNamNet Bridge – Import and export companies are now taking on the logistics work themselves after complaining that new fees at ports are “unbearable”.

VietNamNet Bridge – Import and export companies are now taking on the logistics work themselves after complaining that new fees at ports are “unbearable”. 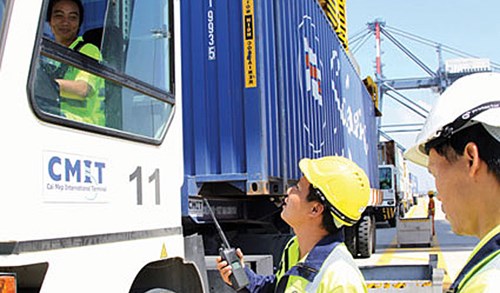 In late July, as businesses tried to clear their imported materials stuck at Cat Lai Port due to overloading, they received notices from shipping firms about a new PCS (port congestion surcharge), equal to $50-100 per container.

PCS is not the only new kind of fee charged on goods owners. They also have to pay sanitation, repair, storage and invoice fees.

The representatives from different professional associations have voiced their complaints about the many kinds of fees and the sharp fee increases.

They noted that 10 kinds of charges and surcharges have increased by 20-30 percent just over the last year.

An official of the Vietnam Leather and Footwear Association (Lefaso) said that its member companies have to pay approximately one percent of the total footwear export turnover every year ($110-150 million) for the fees.

“We have voiced our protests against the fee increases to shipping firms and we have petitioned state management agencies. However, shipping firms are still turning a deaf ear to our complaints,” said Truong Thuy Lien of Lefaso.

“Meanwhile, the freight has been increasing steadily once every three months. This is really unbearable for us,” she added.

A senior executive of Nha Be Garment Company, a major garment exporter, said Nha Be has to pay $20,000 a month, or VND400 million, for PCS alone. Since the company has a high level of annual imports and exports, it has to pay up to VND70-80 billion a year on shipping fees.

Nha Be has lodged a complaint to the Ministry of Transport, emphasizing that the overly high fees have been burdening Vietnamese enterprises, and have asked for the ministry’s intervention to force the unreasonably high fees down.

However, while waiting for the ministry’s reply, Nha Be has had to “take action to save itself before the Ministry of Transport saves it”.

Nha Be’s managing director Pham Kieu Oanh said since late 2013, the company has been carrying and handling goods itself. It has also been following necessary customs procedures to save money.

“We have realized that we have been overcharged by shipping firms,” Oanh said.

“We have saved VND20 billion in shipping fees since we began doing the work ourselves,” she continued. “We have to pay a very high rent for the logistics firm’s office in district 1 in HCM City. However, we can still save a great deal of money.”