Prime Minister Nguyen Tan Dung has urged ministries, sectors and localities to do their best in order to fulfill socio-economic targets set for 2016.

Prime Minister Nguyen Tan Dung has urged ministries, sectors and localities to do their best in order to fulfill socio-economic targets set for 2016. 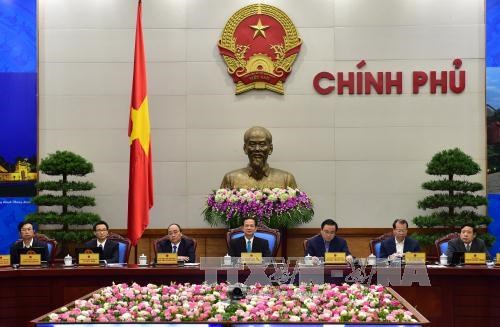 Chairing a teleconference between the Government and representatives from 63 localities nationwide in Hanoi December 28, PM Dung stressed the need to thoroughly analyse the 2015 socio-economic performance results as foundations for figuring out appropriate measures to realise the 2016 socio-economic objectives, which will be set by the upcoming National Party Congress and the National Assembly.

During the meeting, participants discussed a draft Government report on key solutions in directing and managing the implementation of the socio-economic development plan and State budget estimates in 2016.

They also reviewed the inspection and settlement of complaints and denunciations, anti-corruption and administrative reform in 2015 while assessing the improvement of the business climate and national competitiveness, the implementation of e-government and the revised Investment and Enterprise Laws.

The enforcement of new laws that took effect in 2015 and those will become effective in 2016 was also debated.

Reports presented at the meeting showed strong efforts of the whole political system to realise the 2015 socio-economic objectives.

The macro economywas stable with low inflation rate, up only 2.05 percent compared to 2014.Total budget collection was estimated to reach 884.7 trillion VND (40 billion USD), exceeding the yearly forecast while total spending was over 1,060 trillion VND or 92.8 percent of the estimates.

All economic sectors recorded stable development, while social and political security was ensured.

PM Dung said solutions for 2016 should be built on the basis of the actual socio-economic development and must be implemented promptly and comprehensively.

Minister of Planning and Investment Bui QuangVinhreported that the recovery and high growth of industrial production sector and strong development of foreign direct investment (FDI) enterprises were key contributors to the nation’s economic growth in 2015.

Regarding the agricultural field, Minister of Agriculture and Rural Development Cao DucPhat said that although the prolonged El Nino phenomenon seriously impacted the country’s agricultural production, the sector still maintained stable growth and export volume thanks to flexible and appropriate measures.

The minister urged localities to increase investment in agriculture, focusing on improving infrastructure and ensuring food security, which are alsopriorities of the sector in 2016.