A 22-year-old Vietnamese student who has inspired lots of people with her fight against cancer has just decided to participate in the Miss World Vietnam 2022 Pageant. 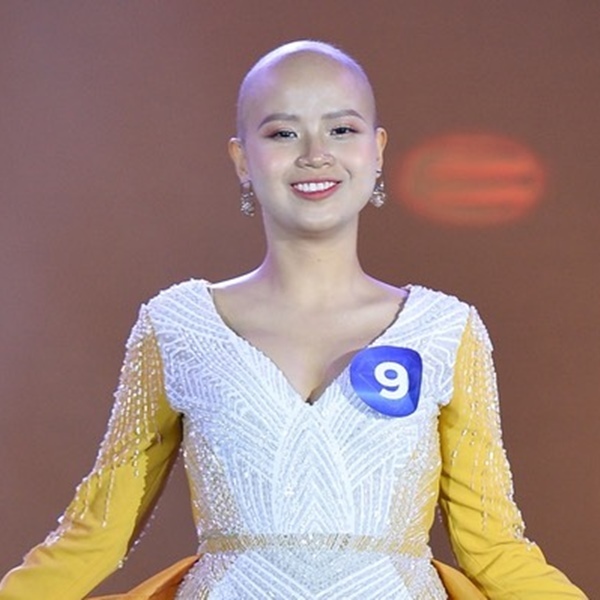 The website of Miss World Vietnam 2022 has just posted a brief introduction about contestant Dang Tran Thuy Tien with measurements of 89-68-100 and 1.7 metres tall. Showing a hairless portrait photo, Thuy Tien said that she wanted to inspire others.

Dang Tran Thuy Tien, a student at the Hanoi-based Foreign Trade University first captured the public's attention after appearing in the university's beauty pageant while receiving treatment for breast cancer in 2019. As her story was shared by local media, she has received lots of support from the public. Prime Minister Nguyen Xuan Phuc also sent a letter to encourage her.

Thuy Tien said that she was very shocked at first when being informed by doctors that she was at the second stage of breast cancer in June 2019. However, with love and support from her family and friends, she was determined to fight against the disease.

"Doctors at National Cancer Hospital in Hanoi said that I was the youngest patient they had ever diagnosed with breast cancer," Tien said. "I decided to undergo surgery and then strictly followed the treatment at the hospital."

And while suffering from many side effects caused by the chemotherapy including weight loss and hair loss, Thuy Tien heard about a beauty contest being held at her university and decided to participate. Tien’s confidence and optimism left a strong impression on the panel of judges.

Vu Manh Cuong, the head judge of the Foreign Trade University's Beauty Contest then said that Tien showed no signs of a patient suffering from a disease and when she appeared onstage and looked across the auditorium, she touched the judges with her eyes full of love and energy. And she won the title of ‘Miss Inspiration’ at the contest.

After winning a title at the competition, Tien also won the fight against cancer at the end of 2020. She has returned to class and participated in various charity activities to support other cancer patients.

“The fight against cancer has brought me more strength and after that, I treasure life more," she said. "I will try to keep my optimism and hope to spread it to more people, especially those who are suffering from the disease."

Miss World Vietnam 2022 Pageant will be held on May 27 in Vung Tau City. The winning contestant will represent Vietnam at the Miss World 2022 Competition.