Care shaped by a shared ordeal

Most people in their 30s are busy trying to set up a happy life and pursue their dreams, but for Hoang Thi Dieu Thuan, happiness lies in being by the side of child cancer patients.

Thuan, 33, from Quy Hop District in north-central province of Nghe An, bravely overcame her own 12-year battle with cancer and now devotes herself to inspiring other cancer patients, especially kids, in special ways. 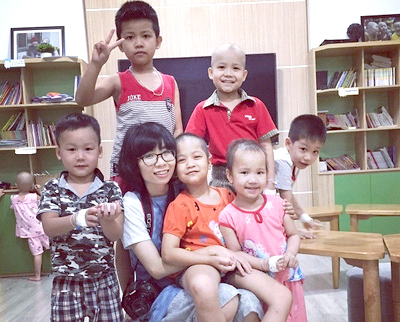 She also hopes to do more for underprivileged kids beyond love and empathy.

Her establishing a charity called Muon Anh Mat Troi (Rays of Sunlight), named after her autobiography, which she wrote during her struggle, particularly as she underwent a bone marrow transplant, shows she is willing to help kids with all her heart.

Diagnosed with cancer at the age of 18, just as she began her university studies, Thuan’s treatment programme saw her change from a cheerful soul into a quiet, suffering young woman.

The pain was constant during her time at the Haematology Institute. Her worst spiritual moment came when a fellow patient and fast friend died. She fell into a state of shock and panic.

Her friend wasn’t the only one she watched fade away, and it made her ill-tempered and cynical.

“I had lost all hope by then, I think. Like the others, there was no future for me,” Thuan recalled with great sadness.

She was terrified, in fact, but she then began to see how many patients were bravely fighting the disease and her own family’s efforts to help her overcome the pain.

Her brother even gave up his studies to work and earn money for her treatment.

She vowed that those negative days were behind her, and only hope and life lay ahead.

After graduating from university with a bachelor’s degree, her long medical record made finding a job difficult.

Then, in 2012, she underwent a successful bone marrow transplant. She still had to visit the hospital regularly, though, to take immunosuppressants, because her blood indicators remained quite low.

As her health improved, Thuan wasn’t interested in being in the treatment ward for adults. When she had the time, she visited a special place on the sixth floor of the hospital -- the children’s cancer ward.

“Looking at those innocent children, watching them play and hearing them tell their stories, makes me love life even more,” she said.

She joined them in their daily routine and in entertainment pursuits, even after she left hospital.

“Then, some were gone,” she remembered. “The first few times I heard that one of the kids had died, I burst into tears and felt a tightness in my chest. I thought my seven long years of treatment had hardened me, but I just couldn’t keep my composure when I’d find out their little lives had gone.”

Sometimes, though, the tears would not come, as the energy just wasn’t within her.

“I couldn’t do anything for days afterwards,” she said.

She is haunted by the silhouettes of kids that fill her mind whenever she goes to work, does exercise, or gets ready for bed. She sees them smiling innocently and hears them chatter away with their parents. Then finally, comes images of them passing away.

Thuan established Muon Anh Mat Troi with all the money she earned from her biography of the same name. Whenever Tet (the Lunar New Year) comes, she also sells lucky money bags to raise money.

All funds go to buying diapers for the children. Whenever she hears of a child facing extremely tough times, she also uses the funds to offer them a little more support.

She hopes to spread her work to the community, so that more children can be helped.

In August 2019, she organised a talk show entitled “Em Uoc Mong Sao” (I Wish), about kids with cancer.

She long had the idea for the show and the children were the main participants, speaking freely and revealing their dreams.

“I held the talk show to make the kids feel happy, loved, and respected by everyone,” she said.

“I hope I can awaken their dreams, bring them more joy, and provide motivation and a spiritual boost as they undergo treatment.”

Music and singing count among Thuan’s interests, and she hopes to open a small embroidery shop to earn a living and raise more donations for her charity efforts.

“I don’t want my family to worry about me anymore,” she said. “With a stable income, I will have more time for charity work, which I will do until it’s no longer possible.”