VietNamNet Bridge – Investors, both foreign and domestic, have been flocking to the northeastern province of Quang Ninh province as it is expected to be an international urban area by 2050.

VietNamNet Bridge – Investors, both foreign and domestic, have been flocking to the northeastern province of Quang Ninh province as it is expected to be an international urban area by 2050. 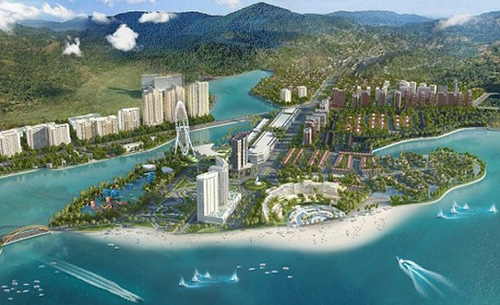 The major province  is one of the most attractive destinations for real estate developers thanks to its great advantages for tourism development and the local authorities’ desire to encourage investment in the service sector.

Quang Ninh became even more attractive recently when the provincial authorities announced a plan to build it into an international urban area by 2050.

A special economic zone, Van Don, will be set up there in the future, while a casino project has been put into discussion.

Thai Amata Group is reportedly moving ahead with its plan to build a hi-tech industrial and urban zone in Quang Ninh with investment capital of up to $2 billion. This is expected to be a 7.8 hectare complex, comprising a high-technology park, free trade area, research & development center, educational establishments and urban area.

The Quang Ninh provincial authorities have requested the investor to submit the detailed plan for approval and investment licensing, slated for September.

IPP Group and the partners from Australia on June 10 visited to seek investment opportunities in Van Don, where they plan to build duty-free shops.

The US-based ISC Corp has also expressed its willingness to invest in a $7.5 billion recreation complex with a casino on Tuan Chau Island of Ha Long City.

Meanwhile, Quang Ninh’s authorities have called for investments in a series of huge projects, including a recreational complex with a casino, capitalized at roughly $4 billion.

The company recently signed a credit contract with LienViet Post Bank on funding the international marina and Smart City projects worth hundreds of millions of dollars.

Meanwhile, Syrena Vietnam, a subsidiary of Bim Group, is going to kick off Little Vietnam, a project in the Ha Long Marina Urban Area.

Sources said Vingroup is also considering developing a resort with 5-star hotel in Ha Long City on an area of 4.96 hectares.

Sun Group has asked for the provincial authorities’ help with three big projects, including a coastal amusement park, an eco-tourism complex on Minh Chau – Quan Lan Island and a hot spring resort in Cam Pha City.

A senior executive of Bim Group said the group can see great potential in Quang Ninh. Unlike Hanoi and HCM City, Quang Ninh is a golden land for tourism & resort development.