Dao Thuy Phuong in Can Tho City has 1.5 hectares of catfish breeder ponds. In general, Phuong sells the breeders 2-3 months after farming. However, the fish cannot be sold, though she began farming one year ago. 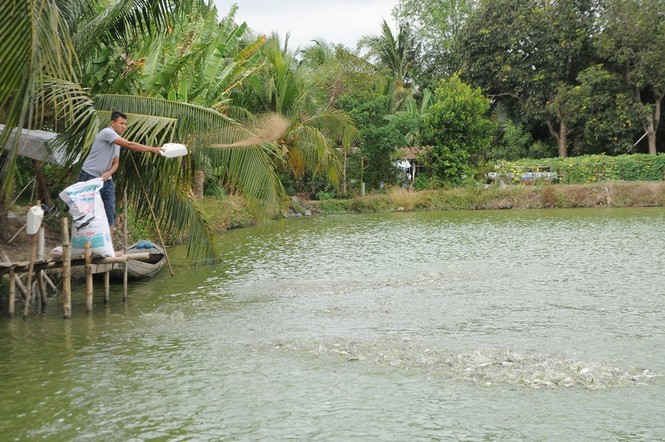 Farmers in the Mekong Delta said catfish breeder prices have been low for the last year. The price increased to VND30,000 per kilogram at times, but mostly stayed at below VND25,000 per kilogram, lower than the production cost of VND30,000.

Many farmers, like Phuong, decided to keep breeding the fish, hoping that the prices would rise.

The farmers raising catfish for food are in the same situation. Le Thanh Van in O Mon district said he has sold 70 tons of catfish at VND18,300 per kilogram, which means a loss of VND3,000 per kilogram.

Van still has two ponds of catfish with estimated output of 170 tons. He is raising fish at a moderate level while waiting for the prices to increase.

Duong Nghia Quoc, chair of the Vietnam Pangasius Association (Vinapa), confirmed that the catfish price has dropped dramatically and that sales have been stagnant because of low demand.

The problem lies in oversupply. As the catfish price reached its peak in 2018, farmers rushed to raise fish, leading to a rapid increase in farming area. However, since 2019, the catfish price has dropped sharply, causing many farmers to sell fish at a loss and leave ponds idle.

The situation is even more serious this year because of Covid-19, especially because Vietnam’s catfish exports rely too much on the Chinese market. In 2019, Vietnam exported $662 million worth of catfish to China out of total export turnover of $2 billion.

The Vietnam Association of Seafood Exporters and Producers (VASEP) admitted that the reliance brings high risks. The orders from China dropped by 70 percent in February and March.

Among seafood products, catfish has suffered the most during the Covid-19 epidemic. The catfish export turnover to the EU was $26 million only, a decrease of 40 percent compared with the same period last year. Exports to Italy, Germany and the UK have been at a standstill since March when the countries became epidemic centers.